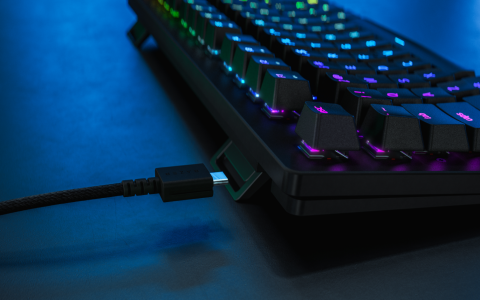 Razer’s latest keyboard features a new optical switch with fast 1mm actuation and an esports-friendly compact design. But unless you’re truly an elite gamer looking to take a $130 chance on the Huntsman Tournament Edition giving you a gaming edge, there are better, cheaper options out there.

Is anyone keeping a count of exactly how many switches are on offer in today’s gaming keyboards? There are the ever-expanding Cherry options, the numerous knockoffs, custom alternatives from the likes of Logitech and Razer, analog switches like those found in the SteelSeries Apex Pro, and light-actuated optical switches like the ones found in Razer’s new esports-themed Huntsman Tournament Edition tenkeyless model we’re taking a quick look at here. It’s almost enough to send a long-time mechanical fan like me running back to the comfort and simplicity of the rubber-domed models I happily gamed on in the late '90s. Almost.

In case you’re keeping track, the optical switches in the Huntsman Tournament Edition are actually a sort of 2.0 revision of the switches that debuted last year in the Huntsman and Huntsman Elite models. What’s new this time? In an effort to appeal to elite esports gamers, Razer has shortened the actuation point from 1.5 to 1mm for a faster response. And the company has stopped using the phrase “opto-mechanical” in these linear switches, in what seems like an attempt to pitch optical switches as an elite option above and beyond the mechanical switches we know and (mostly) love.

Other gamer and/or esports-friendly features on the Huntsman Tournament Edition include a compact tenkeyless shell, a removable braided USB-C cable, and the ever-present Chroma RGB lighting. I also like the two-level feet at the back, which seem more robust than those found in many other gaming keyboards I’ve used over the years.

There’s a focus on the doubleshot keycaps here as well. Razer says they will resist wear and retain their texture over those grueling gaming sessions. The company also says the caps offer the “thinnest, sleekest font available in a PBT keycap,” because apparently elite gamers demand thin fonts.

Razer sent along a Huntsman Tournament Edition just before its announcement. And while I didn’t get to spend weeks gaming on it, I did spend some quality time with this compact clacker, and came away with mixed impressions. First off, either the thin font or the design of the optical switches themselves (or both) seem to noticeably limit light output. Even at maximum brightness, the colors coming from the keys looked dim and dull in our brightly lit office. So if you really like your RGB keys to pop, particularly when the lights aren’t turned down low, you might want to look elsewhere.

The switches are also loud when bottoming out, particularly when pounding heavily on they keys (which I have a tendency to do), giving off a soft of plasticky ringing sound. It didn’t bother me or my colleagues in the office that much, but your ears may beg to differ. If you’ve been irritated by loud key sounds before, you may want to give these a try before committing to a purchase. The linear MX Red switches on the Corsair keyboard I’m typing this on are comparatively much quieter.

And while I like the compact design and style of the Huntsman Tournament Edition --Razer even added a repeated text design of TKTK across the entire back-- the feel of the keyboard overall is a bit plasticky, especially given the rather high $130 / €150 MSRP. Granted, elite gamers on the go probably don’t want to carry around a heavy keyboard built like a tank, and Huntsman Tournament Edition does have a matte aluminum plate for rigidity. But if you’ve spent years with a bigger, heavier, mechanical clacker, you’ll be in for some adjustment.

As for the benefit of the 1mm actuation on the new optical switches? I’m not going to pretend to be fast enough in my current re-playing of 2016’s Doom, or the steampunk zombie strategy game They Are Billions to be able to tell the difference. The switches worked well, just like the mechanical ones in the last five or ten keyboards I’ve used. If you’re consistently ranking with the best in CS:GO or Fortnite, the faster switches may give your a bit of an edge. But don’t expect miracles.

Another nice touch -- particularly for those who don’t like that sweet, sleek font on the keys or who just like to customize their gaming weapon: Razer has standardized the size of the keys on the lower row (and the rest of the keyboard as well). So the company says you can opt for pretty much any standardized third-party keycaps as well, which you couldn't do with all of the keys on prior Huntsman models.

Then again, given the $130 asking price, if you’re already considering the added cost of additional keycaps, there are probably better options available--unless you put particular stock in Razer’s new optical switches and their 1mm actuation.