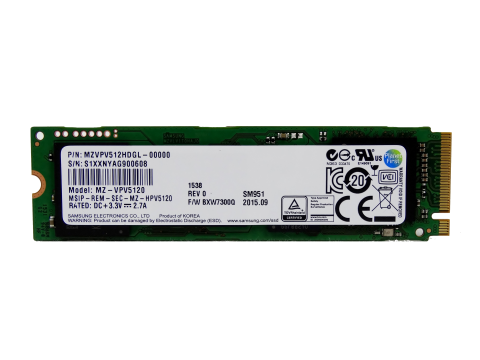 The Samsung SM951-NVMe is available today from RamCity and currently costs less than the 950 Pro. We hope to see more separation in pricing, which would make the SM951-NVMe a better value. Right now, the prices are too similar to make us choose the SM951-NVMe over the 950 Pro, but that may change soon.

Now, with two powerful NVMe-based M.2 SSDs shipping simultaneously, we want to know which one is better. RamCity sent us two SM951-NVMe drives and gave us the idea to run a full RAID report covering all three Samsung PCIe SSDs for the M.2 form factor.

This may be one of the last RAID report articles I write about client-based hardware. New enterprise strategies like object storage and software-defined storage allow for array-like systems without the added expense of dedicated hardware. Intel added support for RAID 0, 1, 5 and 10 in the Z170 PCH, but its performance benefits are really most apparent with SATA-based drives. The NVMe protocol, with its ultra-low access times and >2 GB/s sequential performance in a single SSD, enables performance in excess of what you'd get from a typical RAID array, without the additional configuration requirements.

The SM951-AHCI is at a disadvantage due to its interface, which was designed for legacy storage. The two NVMe models, SM951-NVMe and 950 Pro, remove that bottleneck and allow the drives to perform at higher levels. Surprisingly, the 2D and 3D flash technologies deliver nearly identical performance. 3D flash facilitates higher sequential read speed, while the 2D planar flash achieves slightly better sequential writes. Random read and write performance is identical between the NVMe-attached drives; that's also where the AHCI model suffers most.

The SM951 drives do not work with Samsung's Magician software, unfortunately. Also, the 950 Pro does not support Rapid Mode, a DRAM-based caching mechanism used to increase performance and reduce wear on the NAND.

Samsung's SM951s are sold to system integrators and OEM builders. You have to find them on the gray market. RamCity currently has the SM951-NVMe 512GB available on Amazon for $345. That price is slightly lower than the retail Samsung 950 Pro. It also has the SM951-AHCI 512GB available for $337.

The SM951 drives sold by RamCity do include three-year warranties. Note, though, that gray market products aren't guaranteed by Samsung. All claims have to go through the vendor.

RamCity ships in a branded package inside a bubble bag. Our drives came from Australia and arrived within three to four days. Amazon shipments could arrive sooner, depending on your location. Since our drives are samples, it was easier to send them out directly.

The drives arrived in a foam-lined box with adequate protection for an SSD.

The SM951-NVMe fits components on both sides of the printed circuit board. The M.2 specifications allow for both single- and double-sided layouts, though some notebooks require a single-sided configuration. We have yet to run into a desktop motherboard that limits you to one or the other.