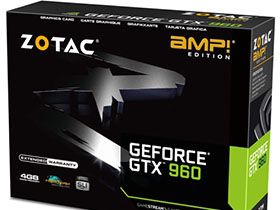 Since there is no reference cooler for GeForce GTX 960 cards, all we can do is test against competing models with the same GPU. For this metric, we're comparing Zotac's GeForce GTX 960 AMP! Edition to EVGA's GTX 960 SSC ACX 2.0+ and Asus’ GTX 960 Strix.

The graph above illustrates the thermal differences between all three cards. Zotac’s cooler is ample, but the GPU underneath runs much hotter than the competition. Nvidia specifies its processor for a 98-degree ceiling, and we're nowhere close to that. But still, if you plan to keep your hardware running reliably for several years, Asus' 20-degree advantage is unquestionably favorable.