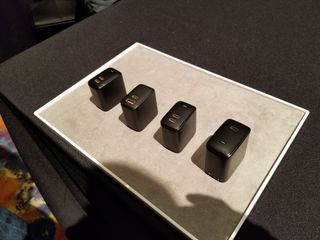 We're going to have stop calling laptop chargers "power bricks."  Thanks to the increased popularity of gallium nitride (GaN) components, which conduct energy better than standard silicon, we're seeing smaller and smaller third-party AC adapters. Aukey's new Omnia series of slimmed down chargers take the cake, delivering between 61 and 100 watts of juice in the tiniest packages we've ever seen.

Due out in the second quarter of this year, the five Omnias will be available in black or white and feature either one or two USB Type-C ports for outputting to your laptop, tablet, phone or other device.

To see just how small the Aukey Omnias are, I placed three other 60-65 watt USB PD laptop chargers I own next to the 61-watt Omnia PA-B2. Even the smallest charger in the bunch, the RavPower PD Pioneer 61W was noticeably bigger. And Aukey's own 60-watt PD charger, which also has both Type-C and Type-A ports, was the largest of the them all.

There's no comparison at all between any of these third-party chargers and Apple's chunky MacBook chargers or Lenovo's rectangular ThinkPad USB-C chargers. According to Aukey, an Omnia is 66 percent smaller than the equivalent AC adapter for a 13-inch MacBook.

Having a small USB PD charger can make a huge difference in your tech life. It means less space taken up in your bag and on your desk. These chargers are so compact that you can carry them around in your pocket.

It's also important to remember that, even though the Omnia Series chargers have enough power to juice a laptop, they can also provide electricity to other USB PD devices such as phones, tablets or even Raspberry Pi 4 B computers.

There's no word yet on the pricing for any of the five Omnia models, but they will probably cost a bit more than today's somewhat-chunkier Aukey chargers, which go for around $35.