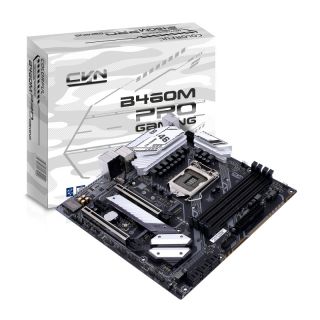 Each of the new boards offers the same core functionality but as we move up the range we see more features. At the most basic level is the micro ATX, BATTLE-AX B460M-D V20 which has two DIMM slots for up to 64GB of RAM, four SATA 3.0 ports and a single M.2 slot for PCIe or SATA storage solutions. The board can support up to 65W processors. Audio is provided by a Realtek ALC662 offering six channel audio.

Spending a little more money we see the BATTLE-AX B460M-HD PRO V20 which differs to the previous board by an offering an additional SATA 3.0 port, another M.2 slot for WiFi / Bluetooth connectivity. This version of the board offers improved audio via an eight channel Realtek ALC887 chip.

The CVN B460M GAMING PRO V20 is the most interesting of the trio. A full ATX form factor board, featuring support for Intel Comet Lake S CPU and with four DIMM slots supporting up to 128GB of RAM. An additional SATA 3.0 and M.2 port over the previous model gives us a little more connectivity for our storage. The big difference with this board is that a 10-phase power design offers the best chance to get the most from the 10th Generation Intel processors.