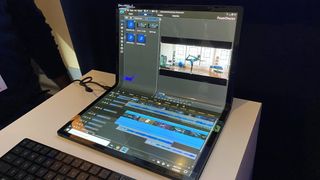 At it's press conference here at CES 2020, Intel announced its Horseshoe Bend concept 17-inch foldable. Soon after, we got to look at it up close.

Intel was really careful with it. The company only allowed its own employee to fold it, and even he didn't do so all the way. The most I could touch it was scrolling on the screen.

And that 17-inch screen is beautiful. While in concept, it's basically just a bigger version of the 13.3-inch ThinkPad X1 Fold we saw from Lenovo, that bigger screen makes laptops that adopt this design seem more like real workhorses. While 17-inches can sometimes seem too big on a clamshell, it seems more manageable here.

Intel also was showing off Horseshoe Bends with a mockup keyboard, much like the X1 Fold's. It wasn't working, but I was told that the idea was that it could sit on the laptop and charge while inside. This is actually an improvement on the X1 Fold, because the keys were full-sized and not as close together.

The other big design difference is that Horseshoe Bends has a kickstand similar to that on Microsoft's Surface Pros, which feels like it could be a bit more steady.

Intel said the laptop is working on the 10nm+ "Tiger Lake" chips the company teased last night. It was also using Windows 10 Pro, and Intel reps wouldn't comment on if the design was meant more for Windows 10X.

But where Intel is showing off a concept, Lenovo has announced a price and a release window. (Dell, too, showed off concept foldables). So while Intel may be pushing it forward, there are OEMs already getting ready for market.