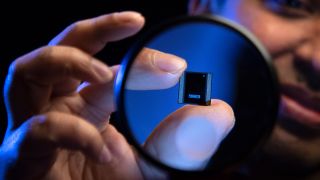 Both CPUs, a Core i5 and Core i3, have a 10nm single Sunny Cove core for heavier workloads and four low-power Tremont cores for background tasks that are less intensive. While ARM laptops, like those running Qualcomm’s chips, have used a special version of Windows 10 for ARM that emulated 32-bit apps and doesn’t support 64-bit, the Lakefield chips will natively support both.

It’s going to be in the Samsung Galaxy Book S, a clamshell laptop that previously only came with a Qualcomm Snapdragon 8cx and is launching only in select markets, as well as Lenovo’s upcoming ThinkPad X1 Fold, which was unveiled at CES and is scheduled to release this summer.

Intel says that the CPU package is 12 x 12 x 1 mm and gets there by stacking the two logic dies and two layers of DRAM. This also gets rid of the need for external memory.

There are also serious performance promises, including hardware-guided OS scheduling. This should ensure that the OS runs apps on the most appropriate core. Back at CES, when Lenovo showed off the ThinkPad X1 Fold, it said that Windows 10X would include the scheduling that would allow for applications to target the right core and increase battery life. In a call later, on, Intel said that the Lakefield processors are optimized only for Windows 10, and not the upcoming Windows 10X.

Here, Intel is claiming up to 24% better performance over an Intel Core i7-8500Y per SOC power (measured by web browsing power efficiency in WebXPRT3 score per watt) as well as up to 12% faster single-threaded performance in integer compute applications.

Additionally, Intel says Gen11 graphics will allow up to 1.7x performance (as measured in 3DMark) over the i7-8500Y  and can convert videos up to 54% faster. There is also more than two times the throughput for AI workloads.

These processors are also poised to deliver long battery life. It’s Intel’s first Core processor to use as low as 2.5 mW of SoC power during standby. It also is the first Intel chip with dual internal display pipes, which Intel says makes the parts “ideally suited for foldable and dual-screen PCs."

Intel is making an interesting branding decision: Intel Core processors with Intel Hybrid technology don't have a generation attached. They will have badges similar to those of 10th Gen processors, but without that branding. It will only list which model is being used.

As always, we’re looking forward to getting systems with Lakefield parts inside to give them a spin in our labs.