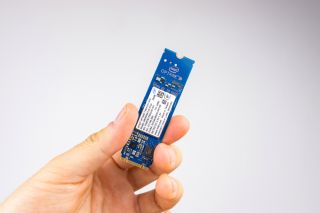 Update 6/6/2020 6:30am PT: Intel reached out and clarified that the issues impact Optane Memory M10 and H10 drives, but not the standard stand-alone Optane SSDs. The company says the update is not blocked due to Optane memory devices, but that users reporting the issue may have blocks assigned for other reasons. Intel says the issue doesn't cause performance degradation and that OS rollback isn't required. Intel's support page has resources to help impacted users here.  We've amended the text below to reflect the new information.

Windows' latest May 2020 update is out as of a few days now, but it's causing a handful of headaches for users. One particular group that's affected are users of Intel Optane storage accelerators. As spotted by WindowsLatest, that's causing headaches for Optane users.

Intel posted a support page to address the issues. According to WindowsLatest, another method to fix the issue is to go to Control > Programs > Programs and Features, and uninstall the "Intel Optane Pinning Explorer Extensions." After this, head to device manager to disable Intel Optane, restart, re-enable Intel Optane, and restart again.

Supposedly, a handful of Microsoft Insiders (people who test new Windows versions before public release) have reported the problem prior to the public launch of the May 2020 update, but Microsoft hasn't done anything to solve the problem.

Microsoft's new gradual rollout strategy is thus already paying off for them, and will typically keep you safe from these kinds of issues, unless you're among the first to receive the update.