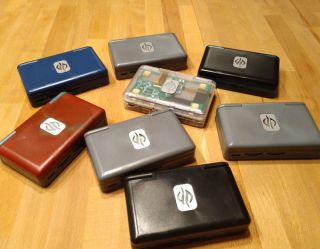 It's the end of an era...or the start of a new one. The first prototype version of Pyra, a handheld gaming system based on open source technologies, started to reach pre-order customers on December 23 after more than five years in development.

Pyra's basic design closely resembles the Nintendo DS product line: it's a clamshell product with a 5-inch display on top and a directional pad, face buttons and other gaming related input methods underneath. There are some changes, though, with the most obvious being the inclusion of a backlit keyboard beneath those buttons.

The device is based on a Texas Instruments OMAP 5 system-on-a-chip that includes two Arm Cortex-A15 processors clocked at 1.5GHz, two Arm Cortex-M4 processors, a PowerVR SGX544-MP2 graphics card and a Vivante GC320 2D Accelerator. Pyra can also be configured with 2GB or 4GB of memory and 32GB of eMMC storage.

Pyra's display boasts a 720p resolution--which isn't uncommon for a display of that size--and it's also equipped with a resistive touchscreen like the ones found in Nintendo's recent handhelds. The device also has built-in Wi-Fi and Bluetooth wireless support as well as a headset port, built-in microphone and HDMI video out.

All of that hardware is used to power Debian Linux. According to the project website, Pyra "is running a full desktop OS" and is "not crippled in any way." That means the device should be able to double as an itty-bitty productivity machine in addition to allowing people to play games made available for that particular Linux distribution.

Work on Pyra started in February 2014. Finally shipping the first prototypes to pre-order customers is an important milestone worth celebrating. It doesn't mean work on the project's anywhere near done, however, as its developer said in a forum post that there are many problems with the current prototype that need to be addressed.

Still, an open source project without significant financial backing reaching its first pre-order customers is exciting. Will most people rush to replace their current handhelds with Pyra when it officially debuts? Of course not. But that's not the point; the project showcases the possibilities afforded by open source technologies.