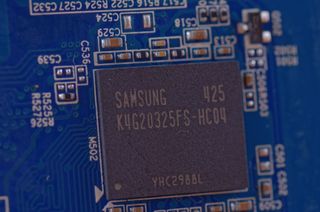 Samsung plans to invest $116 billion and create 15,000 jobs over the next decade in its logic Samsung Foundry business in a bid to become the world’s largest chip manufacturer. More than half of that investment will go towards research and development.

It looks like Moore’s Law is far from over, as the logic manufacturing space is set to become more competitive than ever next decade (albeit with just three players). Intel has disclosed an aggressive process roadmap into 2029, while Samsung announced in April that it will invest $116 billion in its logic chip business by 2030 with the explicit goal to become the world leader. Samsung currently has 18% market share in the foundry market that is dominated by TSMC (and also produces chips for its own use, such as its Exynos mobile SoCs).

The $116 billion investment will be split between $64 billion towards research and development, while the remaining $69 billion will be deployed to invest in manufacturing facilities. Samsung also plans to create 15,000 jobs in R&D and manufacturing.

As Bloomberg cites, Yoon Jong Shik, executive vice president of Samsung’s foundry business, explained at a recent forum in Seoel: “A new market is opening up. Companies like Amazon, Google and Alibaba, which lack experience in silicon design, are seeking to make chips with their own concept ideas in order to boost their services. I think this would bring a significant breakthrough for our non-memory chip business.”

Samsung is purportedly pushing hard to win over customers by touring cities, hosting foundry forums and negotiating deal. The company recently announced that it will manufacture Baidu’s 160 TOPS Kunlun AI chip on its 16nm process together with its I-Cube interposer packaging technology. Samsung will also produce a 5G Snapdragon chipset for Qualcomm and reportedly has won a portion of Nvidia’s 7nm GPU production. Samsung lost them manufacturing of Apple’s SoCs to TSMC with the A8 in 2014.

As it is a 12-year plan, the average spending per year will equal $9.6 billion. To put this into context, Intel planned to spend $16 billion on capital expenditures this year, while TSMC has guided for over $14 billion and also spends over $3 billion annually on R&D. Intel does not break out the components of its $13 billion R&D budget.

A fraction of Samsung’s roadmap for next decade is already known. Samsung and TSMC both plan to start manufacturing their 5nm nodes in 2020 and will make extensive use of 13.5nm EUV technology, as opposed to 193nm immersion lithography with multiple patterning techniques. To that end, Samsung this year completed a $6 billion EUV line in Hwaseong that will start production in February. (Bloomberg even reports it as a $17 billion plant.) One ASML EUV tool costs $172 million.

Meanwhile, Intel this year announced plans to build a new $11 billion fab in Israel within the next four years, and TSMC started construction of its $19.5 billion fab for 3nm.

Beyond 5nm, Samsung plans to introduce its own variant of the gate-all-around nanosheet at 3nm. In this design, the gate of the transistor fully wraps around the channel between the source and drain. This would make it the first manufacturer to move beyond the tri-gate FinFET that is currently used in leading processes. Whether this will give Samsung an advantage in the transistor performance, power and area trifecta, and win over customers, will have to be seen.