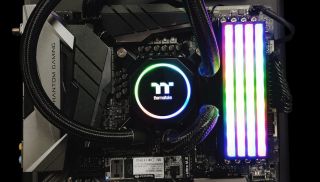 Thermaltake sometimes makes some weird products, and now at CES 2020 we're seeing a perfect example of that. For this show, the company has developed the new Flow RC240 and RC360 all-in-one CPU coolers, which also cool your system's RAM.

As you would expect, the RC240 is a 240mm liquid cooler and the RC360 is a 360mm unit that carry two and three 120mm fans, respectively. The units both come with addressable RGB on the fans, cooling block and memory, and they're compatible with all ARGB ecosystems from motherboard manufacturers. The memory cooling part enters on the side of the leftmost module, with the loop running from the radiator to the pump, then to the memory and back to the radiator.

Of course, Thermaltake can't make a kit with this cooler and memory for every memory capacity and speed that consumers might want, so you'll have to buy the memory separately. Unfortunately, you can't just use any memory --you'll have to use the company's upcoming RC-line, which it claims will be similar in specs to its Toughram lineup. The RC modules will only be available in 32GB kits with four 8GB modules, and the speed options range from DDR4-3200  to DDR4 4400.

Now, we come across a lot of weird products, and often some are, despite their quirkiness, still quite cool and useful for some crowds, but we're having some trouble understanding the purpose of these new Floe RC series coolers.

DDR4 memory does not need active cooling. Unless you want to buy the fastest kit and overclock it even further, a passive heatsink offers ample cooling. The only benefit to running the loop to the memory, as far as we're concerned, is for aesthetic purposes.

In case of disaster, you can probably run the Floe RC cooler on your CPU without connecting it to your different replacement memory kit. You can probably also run the RC memory without the cooler if it were necessary, but both would be slightly awkward outcomes. If using Thermaltake gear, our tip would be to stick to the standard Floe A-RGB coolers paired with the standard line of Toughram memory.

Thermaltake did not specify pricing or availability.