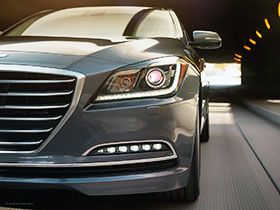 Six years ago, Hyundai took its brand upmarket with the luxurious Genesis sedan. Usually, when foreign automakers attempt to go upscale, new brands and dealer networks are launched. Indeed, Toyota has Lexus, Honda has Acura, Nissan has Infiniti, and even Mazda had stillborn plans for an upscale Efini brand. Hyundai did the impossible and managed to sell quite a few Genesis sedans to value-conscious buyers. This also led to the US launch of the flagship Equus.

But the Genesis and Equus attempted to hide their Hyundai roots. The circled-H badge isn’t featured as liberally as it is on Hyundai’s more economical vehicles. While the Genesis coupe featured the circled-H all around, the sedan had its own unique logo. Nevertheless, the Genesis sedan was a pretty good first attempt from Hyundai at a luxury rear-wheel drive sedan, and even somewhat sporty in the R-Spec package with its 5.0-liter Tau V8.

Despite getting a few updates along the way, it’s time for the first-generation Genesis sedan to retire and make way for the all-new 2015 model. Over the past weekend, Hyundai flew us out to Scottsdale, Arizona to sample the latest generation Genesis sedan in both V8 and V6 trims. The launch came at a good time as I was quite ready to leave the infamous Washington rain for sunnier pastures. So join us as we spend a day driving the brand new 2015 Genesis sedan and play with its technological gadgetry.

Hyundai has come a long way with vehicle design. While the first generation Genesis sedan and even the Equus have somewhat aggressive styling touches, the overall designs are quite tame. With the 2015 Genesis sedan, there’s still a hint of subtlety, but the front end has a bolder in-your-face look that is unmistakably Korean, with a few dashes of European influence.

The front is adorned with LED running lights, while LED fog lights and HID headlights are optional. A giant hexagonal grille finishes off the front of the car and gives the Genesis sedan Hyundai’s best execution of its "fluidic" sculpture design yet. Around the back is the only place you’ll spot a visible Hyundai badge, as the rest of the car sports the winged Genesis badge. There’s no hint of it being a Hyundai until you’re being passed.

Hyundai opts for red and white all-LED tail lights that look fantastic when on. The turn signals are embedded into the white area and light up orange when signaling. Dual exhaust finishes the rear end on both the V6 and V8. The distinguishing difference between the two motors is the use of regular dual exhaust on the V6 while the V8 adds twin tips. There’s also accompanying 3.8 and 5.0 badges for the respective engines.