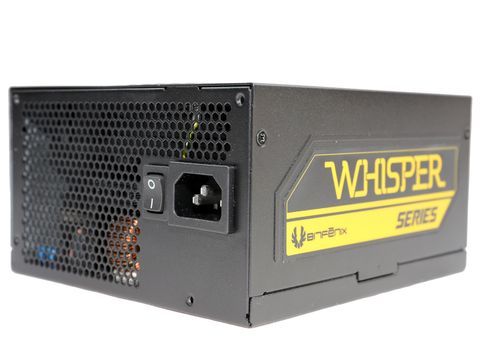 The box is quite large, despite the PSU's compact footprint. There's a photo of the unit with its fan grille up front, along with a nice Bitfenix badge in the middle. The 80 PLUS Gold icon and a seven-year warranty badge are in the top-right corner. Important technical features are listed in multiple languages on the sides of the box.

As usual, there's a lot of product information on the back side. Bitfenix mentions cable length and connector count, along with the unit's dimensions, power specifications, and the cooling fan's speed throughout the PSU's operational range at 25°C. We would like to see a fan speed graph under more realistic conditions, since 25°C doesn't accurately reflect what you find inside of a PC chassis.

Packing foam is used to protect the PSU inside its box, which might not be eco-friendly but still gets the job done.

Along with the PSU, you get a pouch for storing unused modular cables, several zip ties, a set of screws for mounting the PSU, and a user's manual that's common across all Whisper models.

The external design offers nothing new given its classic appearance. However, the badge in the middle of the fan grille looks really nice. Speaking of that grille, it isn't restrictive, allowing plenty of airflow. Up front, there's a typical honeycomb-style grille, and the small power switch is installed right next to the AC receptacle.

The modular panel consists of nine sockets, four of which are dedicated to peripheral and SATA cables. The rest are for EPS, PCIe, and ATX connectors.

Attaching the main ATX cable to the PSU's modular socket isn't as easy as it should be. This cable consists of two connectors that are pretty close to each other, and their wiring doesn't give them much flexibility. As you can see in the photo above, the ATX sockets naturally have their connection clips looking at opposite sides to simplify detachment. But the limited flexibility of the ATX connectors and the fact that you should fully twist one of them makes the whole procedure rather tricky, especially if you perform it with the PSU already installed.

The finish is of good quality and its semi-glossy texture doesn't make it a fingerprint magnet.

The main ATX cable features a large plastic cover, under which three polymer caps are hiding: two FPCAPs and a single Chemi-Con. Those caps are used to suppress ripple.

All cables use dark wires and are flat to avoid restricting airflow in your case.