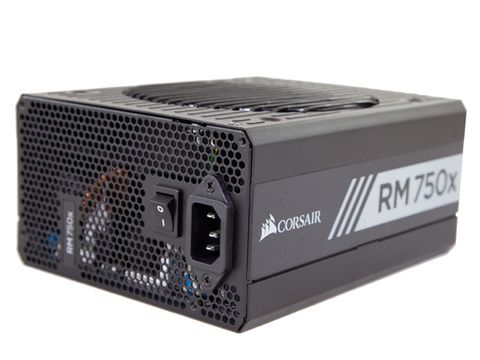 The registered hold-up time was very high. A small difference gave the Corsair RM750i the lead here, however.

Our power analyzer showed a quite high inrush current reading of 230V. This shouldn't trouble you, however, since inrush current stayed below 50A in any case.

At +12V load regulation was decent; however, it didn't manage to meet the competition. We probably pushed the PSU too hard, since at full load the ambient inside the hot box reached 49 C, while we usually stay below 46 C. We wanted to see how loud the unit's fan could be under extremely tough conditions, however, and also verify Corsair's claim about the 50 C rating of this unit. Judging from our overload test, which was conducted at a temperature close to 50 C, the RM750x proved that it has no problem at all operating under extremely tough conditions, delivering its full load for prolonged periods. In addition, thanks to the silent fan and the optimized fan profile, the noise output of this PSU is at very low levels. On top of that, the PSU didn't engage its fan with up to 50 percent load and with an ambient of almost 46 C.

The minor rails, especially the 5V one, managed to keep their deviations low by utilizing the extra voltage sense wires of the Type 4 cables that equip the PSU. And it seems that the increased operating temperatures didn't affect the performance of the DC-DC converters. Finally, the PSU cleared all requirements of the 80 Plus Gold certification. With 100 percent load, it was a close shot, however. As we have mentioned so many times in past reviews, the 80 Plus organization conducts all testing at only 23 C, while we conduct our tests at much higher temperatures, seeking to push the PSUs to their limits. If you want to check performance at lower ambient temperatures (around 28 C), you can take a look at our Cross-load tests on page six, during which we dial (automatically) thousands of possible load combinations.

Prev Page A Look Inside And Component Analysis Next Page Efficiency, Temperature, Noise, Cross-Load Tests And Infrared Images
19 Comments Comment from the forums
Be In the Know