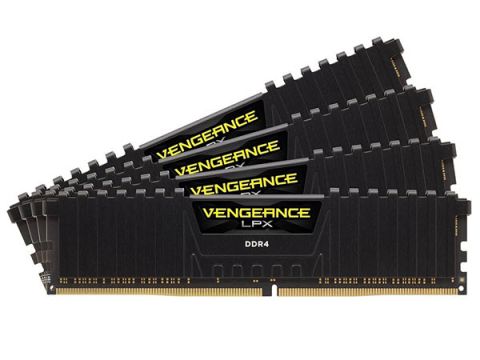 Corsair's CMK16GX4M4B3200C16 quad-channel memory kit puts up solid performance numbers, but its "good value" applies only to builders who want or need the included fans. Besides cooling the modules, included fans could be even more practical in builds that don't have a fan over the CPU.

We've watched DDR4 prices drop last year to the point that at 2133MHz data rate, a 16GB kit (4x 4GB) of DDR4 costs only $10 more than DDR3. That's good news for anyone who skipped X79 and wants to get into X99 for about the same price, but that's not exactly a top data rate any more. Corsair's Vengeance LPX CMK16GX4M4B3200C16 DDR4-3200 costs around a third of the price of its DDR3-3200 at same capacity. We could argue back and forth about DDR4 data rates vs DDR3 timings, but that argument loses any meaning if the platform you're using only supports DDR4. The more relevant question for X99 owners is whether this well-priced DDR4-3200 kit can provide a compelling reason for buyers not to choose even cheaper DDR4-3000, 2800, or 2666.

Our experience indicates that most modules won't get warm at 1.35V unless they're crammed closely together. That's not going to be a problem when placing four DIMMs on an eight-DIMM X99 motherboard, though users who wanted the fans for either custom overclocks or future support of additional modules will find that the price difference between Corsair's fan-equipped DDR4-3200 and its fan-free DDR4-2666 is less than the cost of the fans. From a value perspective, so far so good. Here's how Corsair's Vengeance LPX DDR4-3200 ratings compare to other 16GB quad-channel kits we've tested.

We mention firmware support because most of last year's X99 firmware had a 10x limit, requiring an increase in BCLK "Strap" and custom CPU multipliers to approximate the correct data rate. This is our friendly reminder that if you're upgrading to newer components than your firmware was optimized to use, a firmware update should be first on your to-do list.

Next Page Overclocking, Optimization And Performance
7 Comments Comment from the forums
Be In the Know