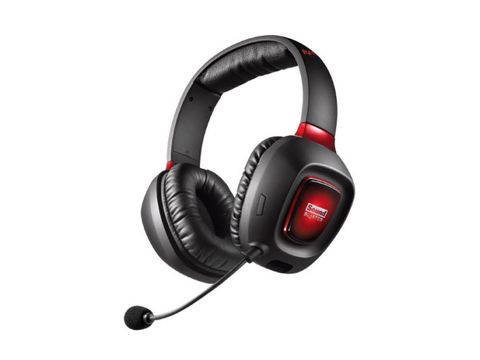 This isn't a premium product, but then again, you won't pay a premium price, either. We're calling Creative's Sound Blaster Tactic3D Rage Wireless v2.0 distinctly mid-range, with no particular strengths or explicit weaknesses.

You have to love a five-part name. The most important part of Creative's bulky identifier shows up toward the end: Wireless. Not mentioned in the name, but still notable are the Sound Blaster Tactic3D Rage Wireless v2.0's lighting effects and complementary software suite, which adds emulated surround sound support. Thanks to an included dongle, this headset is plug-and-play. So long as it's charged up, no additional downloads are necessary to get it working.

A $90 list price gets you the headset itself, a removable microphone, a USB charging cable, and the aforementioned USB-based transmitter as an interface to your PC.

The headset has been on the market for some time now. Consequently, its price has stabilized in the regions Creative targeted.

Although the Sound Blaster Tactic3D Rage Wireless v2.0 has an integrated, long-lasting battery and electronics to go with it, the headset isn't particularly heavy, even if it is physically large. The silky matte-black plastic surfaces resist fingerprints well, making a positive first impression. Instead of a textile covering over the ear pads and frame, Creative instead uses artificial leather made from polyurethane, which may cause you to sweat during longer gaming sessions.

Black and deep red colors dominate Creative's design. However, the Sound Blaster Tactic3D Rage Wireless v2.0 can also be accentuated differently by means of LED effects on the ear pieces.

But what initially appears to be solid build quality doesn't feel particularly well put-together over time. Almost every part of the thin-walled plastic pieces are glued in place. And there's very little metal adding structural integrity, except for the frame.

There's little else to say about the design. It's so simple and inconspicuous that the Sound Blaster Tactic3D Rage Wireless v2.0 almost stands out more as a result. We consider this to be positive, since the most tricked-out headsets often die early deaths when they fall apart. Then again, questionable workmanship gives us little hope that this headset will fare any better over time.

Large heads weren't taken into consideration when this piece of hardware was designed and manufactured. For anyone with a head circumference of 60cm or more, don't even bother taking the Sound Blaster Tactic3D Rage Wireless v2.0 for a trial run. The pressure you'll experience is too much to bear over extended periods.

The problem is not with the headband; it's entirely possible to adjust that as-needed. Rather, even after adjustment, it still squeezes too tight. And although you can rotate the ear pieces vertically, it's impossible to adjust them on the horizontal axis. In other words, you're able to fold them sideways, but they don't move up or down.

Because this is a wireless headset that works on the 2.4 GHz band, the housing contains a lot of technology not found on wired competitors. These electronics are located inside the left shell. Naturally, then, you'll also find the volume control and on/off switch there as well. Both are easy to reach and intuitive to use. Additionally, when the headset is active, the on/off button is illuminated.

The microphone is on the left side too, along with the mute button. It's placed perfectly so that your finger never misses the button when you reach for it.

Communication between the headset and PC works through a USB-attached dongle with transmitter functionality. Audio is sent uncompressed and mostly without delay. Connecting the Sound Blaster Tactic3D Rage Wireless v2.0 is quick and easy. With the dongle attached to a rear USB port, we did lose several meters worth of wandering range, so plug in to the front of your PC if possible. Or use an extension cable to get the dongle onto your desktop.

Again, the ear pieces can be rotated vertically and turned at an angle of up to 90 degrees. The headset is naturally less bulky in that position, so it takes up less space during transport.

Downloadable software not only allows you to adjust the headset's acoustic effects, but also change the LED illumination. Tastes will vary when it comes to simulated surround, so we'll let you draw your own conclusions about Creative's efforts there.

It takes less than 90 minutes to fully charge the Sound Blaster Tactic3D Rage Wireless v2.0. We also like that the bundled USB cable is long enough for continued use while the headset charges. Given anywhere from eight to 16 hours of battery life, depending on volume, the wireless option is a great differentiator!

The omnidirectional microphone is detachable, which makes it easy to transport whenever space is an issue. The plug connection is secure and easy to find thanks to its tactile properties. An additional pop filter reduces wind noises and the acoustic/electrical consequences of a, shall we say, too-moist pronunciation.

A low cut at ~100 Hz does its job well. However, the frequency range with an upper limit of 6.5 kHz is a bit too narrow. Cutting off at 8 kHz would have been better. Creative's noise reduction functionality does work. But unfortunately, at higher levels, the clipping happens too soon. Speech intelligibility is quite acceptable, even if the quality doesn't match up to dedicated microphones.

This is what we're talking about when we throw around the term bathtub. If it wasn't for the dent at 1 kHz, which starts at ~200 Hz and ends at 2.2 kHz after a steep increase, the response might even be somewhat satisfying.

Bass and upper bass are similarly accentuated, which not only sounds good, but also avoids the sloppy rumble of cheap gaming headsets. So, depending on your point of view, this is either a mid-range dip or an amplification of bass and treble.

The low bass is good, audibly present, and somehow free of annoying resonance. From bass to the lower mid-range, performance remains fair. But that's where the acoustic fall-off happens. Its trough sits almost exactly at 1 kHz, where sound characteristics are changed in a not-so-enjoyable way.

Since the mid-range is so severely cut, spacial location suffers most. The consequence is a narrow sound stage in music playback and difficulty placing sources in games. Creative's sound engineering, well-intentioned though it might be, nullifies almost everything that a competitive gamer would need in terms of acoustic feedback.

Spatial reproduction isn't the only characteristic that suffers by heavy-handed meddling. Playback of voices, instruments, and broad-band noises, all of which are typically found in games, are affected as well. While the fundamental sound ranges of vocals (and many instruments) are still pleasant, tonal character and timbre/tone color in the mid-range lack more than we can simply ignore. In addition, there is a slight overemphasis of sibilants and the high/super-high tone.

None of that is to say Creative's potent 50mm drivers are junk. We do, however, recommend using an equalizer to increase the range around 500 Hz a little bit and at 1 kHz quite a bit more. Of course, the inverse is also feasible: you could lower the bass and treble more broadly to compensate for that dip. But we prefer light touches whenever possible, so increasing those two points and reducing the overall levels a bit is the better option.

All of this can be achieved through Windows, yielding much better sound in no time at all. The downside is that it depends on installing more software and your manual intervention.

Given a reasonable price tag around $90, Creative's Sound Blaster Tactic3D Rage Wireless v2.0 is worth auditioning, unless you already know a larger head circumference will cause problems with long-term comfort. In that case, the frame's excessive bending resistance, together with a lack of options for adjusting the ear pieces horizontally, will most likely compel you to go another route entirely.

Creative's rather aggressive sound engineering is a matter of taste. But it can be improved or even neutralized in a few easy steps. Only with those modifications in place does the Sound Blaster Tactic3D Rage Wireless v2.0's spatial positioning in games and balanced music reproduction approach ratings of satisfactory. The 3D surround effect is based on listening experience, and is thus a product of imagination.

Functionality-wise, this headset is fine. Its respectable battery life of 12 hours at normal volume covers even the longest gaming sessions easily. If you like your beats a bit louder, you'll simply have to recharge sooner. And a maximum range of about eight meters with the USB dongle positioned optimally is plenty for any gamer.

This is by no means a premium product. The good news is that you won't have to pay a premium price, either. We're calling Creative's Sound Blaster Tactic3D Rage Wireless v2.0 distinctly mid-range, with no particular strengths or explicit weaknesses.