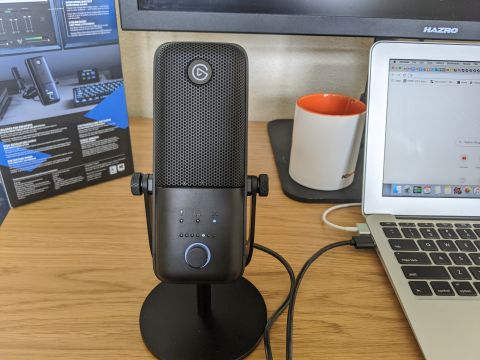 A generous swathe of hardware and software features make the Elgato Wave:3 the streamer mic to beat, but it’s less versatile than others on the market.

Elgato has been a big name in streaming gear since humankind first became interested in showcasing their gameplay on the Internet. Before today’s announcement of the Elgato Wave:3 USB microphone though, it wasn’t a name associated with audio.

But Elgato isn’t alone in its endeavor to make the best gaming microphone for streamers. Since 2018, Elgato’s gaming business has been under the good ship Corsair’s command. On top of that, studio mic specialist Lewitt actually manufactures the product. There are many stakeholders involved here, and while we all know what happens when cooks and broth interact with a degree of surplus, the Wave:3 is a formidable debut for this triumvirate of brands.

Priced at $160, the Wave:3 -- which works with PC and PlayStation 4, plus the Elgato Stream Deck -- sits up there with the Blue Yeti X ($170) at the more expensive end of the market. But with 24-bit / 96 KHz audio, dimensions small enough to take on the road and a few hidden, but very valuable, features, it really gives the streamer mic market a good fight.

Portability is the name of the game here. Rather than top your desk like a grand, RGB-emitting statement, the Wave:3 packs its features into a smart and compact body with bare minimum of fuss.

The all-black, matte design can fit into any setup. Its materials -- plastics on the capsule body itself, metal on the base -- mask any smears and smudges caused by greasy fingerprints. The Elgato branding’s kept to a minimum in the form of a lone white-on-black logo on the front and a very subtle inscription of “Wave:3” up the right side.

In truth, the Wave:3 doesn’t look as convincing as a piece of studio kit as the marginally pricier Blue Yeti X, its nearest competition in both price and features. But while the Yeti X outshines the Wave:3 with its mix of materials and finishes, Elgato’s mic makes up for it in size and weight. The Wave:3’s mic capsule is just 6 inches tall and weighs 0.6 pounds (280g).  I’ve genuinely taken bigger dictaphones to press events than this mic. For comparison, the Yeti X capsule is much heavier at 1.14 pounds, and the gear hits 2.8 pounds if you add the stand. If you want taller range over the Wave:3 though, the Yeti X can extend to up to 11.4 inches.

Like the aforementioned Yeti X, Elgato’s debutante streamer mic manages to place a lot of control into one dial at the front. Pushing the dial in cycles between gain, monitoring volume and PC-mic mix, indicated by the lights above the dial. This dial is simple, efficient and it’s easy to keep track of and use. It feels better constructed than the Yeti X’s, so take another shot if you’re playing the Yeti X drinking game while reading this review.

However, the mic mute button located on the very top is a touch-sensitive inlay rather than a mechanical button. This makes it too easy to accidentally brush and mute yourself. At least there’s no pop sound when you do, thanks to the mic’s internal pop filter. You also get a USB-C port and 3.5mm headphone jack in the back.

It would have been great to see a physical control for the low cut filter on the mic instead of having to load up the software, too, but that’s really getting into the weeds in terms of grievances.

You can improve the Elgato Wave:3’s sound quality through some tweaking in the software (more on that below), but the streaming mic performs properly right out of the box. This gives the mic points in the categories of ease of use and mobility.

It’s not a versatile quasi-studio model with a variety of polar patterns, which explains the directions from which a mic picks up sound. If you’re looking for a mic that doubles up for your at-home re-recording of Fleetwood Mac’s Rumours, it’s best to look elsewhere, like the Yeti X or the HyperX Quadcast (look for the letter X in the name, basically).

Unlike those aforementioned mics, the Wave:3 only has a cardioid configuration. This polar pattern focuses on sound in front of the mic’s diaphragm. As such, the mic’s intended as a master of the vocal streamer mic game rather than a jack-of-all-trades. And it sounds … well, it sounds very good.

When I used the Elgato Wave:3, the high end’s clarity and richness cut through, which is handy when you’re talking over gameplay footage. And that didn’t come with the baggage of sounding tinny or cheap. The Wave:3 is full-bodied, sounds professional and will ensure your streams remain very listenable no matter how loudly you shriek as you open FUT packs or win in Fortnite.

That’s thanks to the Wave:3’s under-the-radar killer feature: a hard compressor/limiter, which Elgato calls Clipguard, that means you don’t ever peak. I turned this thing up to the max and spoke loudly into it from a 0.5 inch away, and it still didn’t give up on me. That’s not to say it sounded totally palatable under those conditions, but hearing a limiter kicking in aggressively is much easier on the ear than hearing the fuzz of a distorted signal. It’s a really valuable feature.

And although the Wave:3 is very much intended for things like Twitch or YouTube compression, it’s also capable of high-res audio recording in up to 24-bit / 96 KHz. That’s nice to have in your back pocket in case you ever want to start podcasting at higher quality than livestreams allow.

Headphone monitoring too is exemplary, resisting peaking and distortion even at really high output levels, and that really speaks for the circuitry inside this mic. Of course it’s very handy to have the monitoring volume level accessible on that front dial.

Despite all these great features, there’s a lot less low end in the Wave:3’s recordings than Blue’s Yeti X. Both mics offer great tone, but for capturing a bit more of those bass frequencies, the Yeti X is better.

Features and Software of Elgato Wave:3

The Elgato Wave:3 is a deceptively feature-laden mic for a unit with so few dials and buttons. In addition to the aforementioned Clipguard anti-peaking technology, (which proves genuinely impressive even when you try your damnedest to break it), there’s an internal pop shield constructed of several layers behind the guard.

While it is possible to push the pop filter to the point of failure, it’s another genuinely impressive inclusion. I found during testing that I didn’t need to add a traditional pop shield while recording. Plus, the filter worked well in tandem with Clipguard. Plosive sounds tend to cause spikes in the waveform anyway, and, thus, the limiter would kick in and mellow out the worst of the sound. To be clear, this doesn’t confuse the formation of vowel sounds; it just minimizes the harshness of P, K, T and B sounds.

The Elgato Wave:3 comes with an adapter for connecting the mic to a boom arm, (which isn’t included, sadly). However, the stand’s adequate too if you don’t have a boom.

The Wave Link app, which works for the Wave:3 and the lower-priced Wave:1 Is essentially a mixing station. There are eight tracks into which you can assign game audio, voice chat, music, alerts and even multiple mics.

This being Elgato, Wave Link is primarily for those broadcasting live, but it’s also very handy for anyone who plays a lot of online games where communication is a focal point. Once you get it up and running, having Wave Link on hand will save you time over dipping into Windows’ sound settings or your best gaming headset’s software.

It’s also here that the low-cut filter feature lives, removing deeper tones and ambient room sounds from the background of your audio. This would have been better as a physical button on the mic, but hey -- it’s still there.

The Wave:3, Elgato’s first flagship gaming microphone effort, ushers in a bounty of features and smart considerations that you don’t find on other mics. It’s thanks to features like Clipguard and the built-in pop shield that the Wave:3 justifies its price tag and earns a place in the market’s upper echelons, both in terms of monetary outlay and quality.

But you’ll also have to live with a little less low-end captured by the mic.If that’s dealbreaker for you, the Blue Yeti X is $10 more than the Wave:3 (as of this writing) and doesn’t have this issue. If you’re looking for an all-rounder with home studio chops, as well as podcasting, streaming and anything else you can throw at it, the Yeti X is still king. Elgato has also released the Wave:1. At $120, it’s similar to the Wave:3 but has a lower max sample rate and more limited dial functions.

It all comes down to purpose. If you want to stream on Twitch or chat with friends while you play and record YouTube voiceover, the Wave:3’s software and hardware place it at the forefront.