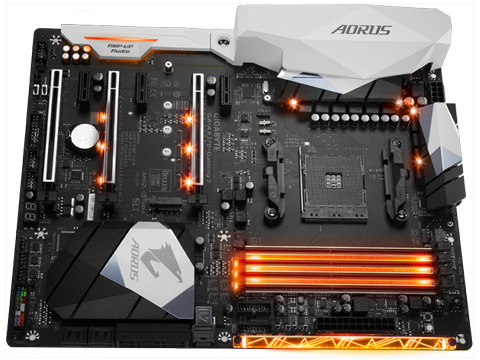 Along with the review sample, Gigabyte sent out a PR kit to further enhance our test experience and add some more comparison data to our X370 review series. The biggest addition to the test bench is a Corsair H110i all-in-one cooling solution. This 280mm radiator solution uses the Corsair Link software to program the LED, fan speed, and pump rate while monitoring various sensors available to the interface.

Gigabyte also teamed up with HyperX to send two Predator 2x8GB DDR4 3200MHz RAM kits. This single rank SK Hynix DRAM has been reported to hit 3200MHz on this particular motherboard model, so we look forward to seeing what our Ryzen sample can drive.

The “Tumbler” is still our enclosed test rig, hosting our GTX 970 GPU, OCZ RD400 M.2 drive, Corsair AX860 PSU, and various other drives. The Noctua heatsinks are taking a short break, but rest assured they’ll get their chance to go up against the H110i.

I've preferred Gigabyte’s more traditional BIOS façade in previous reviews. Plain text in a logical arrangement gets my computer mojo going. This AX-370-Gaming 5 UEFI takes that same approach and tacks on a 90s futuristic motif in an attempt to modernize the interface.

Although we do appreciate the text based feel and the removal of the super-low-level Zen, the lack of descriptions, prompts for +/-, or menu selections make this UEFI pretty confusing. If Gigabyte would have provided a text overlay describing the selection methods and moved away from the 1024x768 window we'd have been much more thrilled (though that could be because I use DisplayPort).

In our attempt at overclocking memory, we are once again battling against early release UEFIs and stability issues. With the first attempt, these HyperX Predator DIMMs do not want to run anywhere above DDR4-2400MHz. Browsing to the Gigabyte support page, UEFI version F5d boasts “improve DDR compatibility,” so we download that and give it a whirl. Again, neither of the XMP SPD settings work and manually adjusting various frequencies and timings fails to improve the situation. We contacted HyperX directly and the company confirmed that this kit could hit 3200MHz on the F4 version of the UEFI. Abandoning the “improve DDR compatibility” version did in fact enable us to get to the XMP Profile2 at DDR4-2933MHz, but 3200MHz was unachievable. Our guess: this Ryzen sample just can’t play with the big boys in the overclocking department. Upon further inspection, it turns out the Gigabyte download link pointed us to release F3n, and that’s not confusing at all (/sarcasm).

Our Ryzen overclocking approach from previous reviews still applies, but with the improved cooling solution we expect to hit something higher than 3850MHz! As usual, increasing the clock multiplier to 38 results in a comfortable system setting in terms of stability and temperature. The Gigabyte AX-370-Gaming 5 lets us increase clock rates in 25MHz increments, so increasing three clicks to 3875MHz lets us launch Prime95 and run for about 10 minutes before dropping to the black screen. Increasing voltages to 1.375V lets the system run for another 30 minutes, so we make the jump to 3900MHz. Disappointment follows success when our screen goes black after an hour. Increasing the loadline setting to High, we gain 30 minutes, but still Prime95 bests our components and cooling solution. After more tinkering with settings to get 3900MHz to stabilize, the 38.75MHz multiplier is the only point at which the overclock would run overnight without fault.