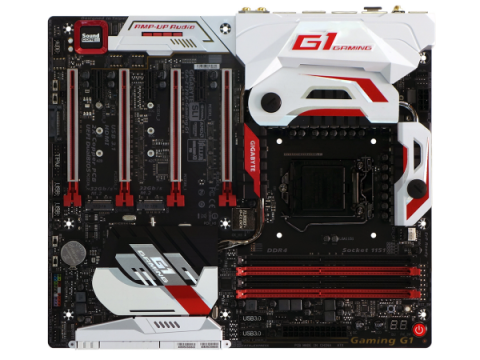 To assure accurate comparisons, we repeat the benchmark configuration from our initial Z170 roundup in every Z170 motherboard review.

Gigabyte's Z170X-Gaming G1 gets sixteen lanes to its top slot through its PEX8747 Switch, while EVGA's Z170 Classified bypasses the switch in single-card mode but is limited to only eight lanes. Added latency from that switch puts the Z170X-Gaming G1 slightly behind in 3DMark, a test which isn't bandwidth-intensive enough to pull down the Z170 Classified.

Apart from that tiny deficit in 3DMark, the Z170X-Gaming G1 performs on-par with the top two boards in synthetic benchmarks.

The Z170X-Gaming G1 finishes less than 1 percent behind the gaming performance leader, in spite of the small latency penalty of its PEX8747 switch. That switch is required to run three or four cards in SLI, so that sounds like a solid trade-off.

The Z170X-Gaming G1 shows average performance in every timed benchmark, which is great since any significant deviation from average would have indicated a problem. We like problem-free products.

It probably makes sense that the board with the greatest number of onboard controllers consumes the greatest amount of energy, yet power misers will still be shocked to see differences of up to 20W. If these results offend you, you're welcome to disable things you're not using. The Wi-Fi controller, perhaps?

Heat also reduced the efficiency of voltage regulators, and lower-efficiency voltage-regulators likewise produce more heat, so the 20W at load is starting to make sense. We could have aimed a fan directly at the voltage regulator, or connected its water line to a liquid cooler, but those changes would have skewed this comparison. We'll reluctantly settle for a 15.5 percent below-average efficiency rating.

Gigabyte produced a special F5i beta firmware to overcome mediocre memory overclocking, but we're not able to use it in overall evaluation simply because it hasn't been verified yet. At least that firmware was public when we started testing, and it even produced record-high four-DIMM data rates.

Switching back to validated F4 firmware, the Z170X-Gaming G1 is still no slouch in the clock comparison.

Want more? We've been collecting additional memory data since the outset of Z170 motherboard testing, including DDR4-3200 bandwidth data on boards that would support it. All of the top models are DDR4-3200 capable, but Gigabyte's Z170X-Gaming G1 takes the prize in bandwidth.

Oh, and in case you were thinking of using that beta firmware to reach DDR4-3600 (four DIMMS) or DDR4-3672 (two DIMMS) but are now afraid that its data-rate-boosting settings might have resulted from performance-penalizing timings, we tested it at both DDR4-2933 and DDR4-3200. Bandwidth remained virtually unchanged.

Gigabyte did a great job of boosting the feature set of its Z170X-Gaming G1, but who would pay $473 for a mainstream-platform motherboard? Perhaps it would be better to question buyers of the competing EVGA Z170 Classified, since that board has far fewer features yet still costs $400. Gigabyte's biggest feature advantages are its Thunderbolt 3 and 802.11ac MIMO Wi-Fi controller, though a bunch of smaller things such as its front-panel USB 3.1 bay adapter, bundle of SLI bridges and integrated liquid-cooling provisions are probably worth as much as those two "big" features. In total, it appears the Z170X-Gaming G1 is worth at least twice its price difference over the Z170 Classified, and that makes it the board we'd choose for a cost-be-damned overclocked Core i7-6700K gaming rig.