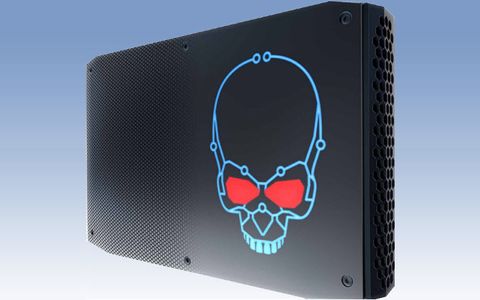 Thermal boundaries limit the NUC VR's performance. Thus, we kicked the fans up to 100% for all of our overclocking experiments, even though that resulted in much more noise than the pleasant-sounding Balanced profile.

A 230W limit is enforced by the power supply, though Intel's NUC also throttles performance in response to over-temperature conditions on the motherboard's voltage regulation circuitry or the Kaby Lake-G package itself. This throttling behavior stopped us well short of ever approaching the 230W barrier. In fact, we topped out at 197W with our Kill-A-Watt during our overclocking attempts.

Well-supported utilities like HWiNFO and AIDA do not report the package power consumption and temperatures of the Hades Canyon components correctly, making it difficult to log thermal data accurately. We will follow up with this data once the developers update their tools. We also monitored CPU and GPU frequencies during our testing to detect throttling.

Overclocking the NUC is all about balance, so Intel suggests tuning it based on your workload. While you can overclock the CPU, GPU, and HBM2, limited cooling capacity prevents you from tuning all three components to their maximum potential at the same time. You can focus on ultimate CPU performance or optimized GPU performance, but not both.

With solid graphics performance established, we decided to add increased CPU performance to the mix. To start, we overclocked the CPU with AMD's Vega GPU and HBM2 at stock settings. This gave us a 4.5 GHz ceiling at 1.05V with memory at DDR4-3200. Initially, we observed stable operation through our application suite (minus AVX-optimized tests). But even with the GPU in its default state, gaming workloads caused the platform to blue-screen.

At the point where we stopped seeing crashes, our CPU was running an all-core 4.2 GHz CPU overclock, listed as CPU 4.2 GHz (GPU Stock). Intel's Core i7-8809G already sports a single-core 4.2 GHz Turbo Boost frequency, but forcing all four cores to that clock rate yielded impressive results in our threaded application benchmarks. We also found that we couldn't drop the CPU voltage below 1.05V and still POST.

Finally, we slowly bumped our GPU and HBM2 frequencies up until all three overclockable components were running stably. This is listed as CPU 4.2 GHz (1250/900). As you can see in the table, we weren't able to apply as much voltage to the GPU and HBM2 with an overclocked CPU, so we settled for a slightly lower 1250 MHz GPU overclock.

You'll find all four configurations in our game testing to illustrate the software's response to various hardware settings. We also include the 4.5 GHz CPU results in our application testing, if only to highlight peak performance with a tuned host processor. We doubt that enthusiasts interested in overclocking would kick game performance to the curb in favor of slightly faster desktop apps.

Intel's AVX offset reduces frequency and voltage when it detects an AVX-optimized workload. We use this helpful feature to attain higher effective CPU overclocks on our desktops. But it's an even more important capability in a small form factor platform. For now, the NUC's AVX offset doesn't appear to be working correctly, which we reported to Intel. As a result, we do not include any AVX-based testing with HandBrake or y-cruncher for our overclocked configurations.

The BIOS' overclocking options are fairly Spartan. A few staples of modern tuning, such as Load Line Calibration control, are missing. This is likely due to Kaby Lake-G's power balancing capabilities. Intel expects enthusiasts to overclock primarily through its XTU, though we didn't see any equivalent controls in the software. Hopefully Intel refines its firmware to expose more knobs and dials. The NUC also needs an exterior BIOS reset button. There were several occasions during testing when holding down the power button did not work. Each time we had to remove the enclosure's cover and a secondary panel inside the NUC to access the BIOS reset jumper.

Kaby Lake-G is truly unique, so it's hard to find configurations to benchmark against. In this first round of testing, we're looking to determine whether the NUC 8 VR can replace low-end desktops as we weather a debilitating shortage of add-in graphics cards. As such, it goes up against several PCs featuring an Nvidia GeForce GTX 1060. On paper, that puts Intel's NUC at a theoretical disadvantage. But it also gives us some context. Meanwhile, we're amassing comparable small form factor systems with MXM-based 1060s for follow-up testing.

Prev Page Connectivity & Teardown Next Page AotS: Escalation, Civilization VI, Dawn Of War III
14 Comments Comment from the forums
Be In the Know