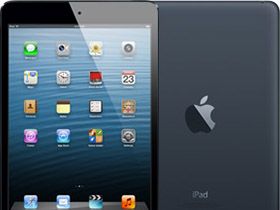 Apple iPad Mini: You Want How Much For That Thing?

For a very long time, 10"+ tablet screens were considered the norm, wowing us with plenty of room to swipe and pinch our way around iOS and Android. But as with most things that start big (and expensive), it was only a matter of time before the tablet experience was distilled down into something less grandiose, but also more accessible and, in many ways, more practical. Call seven-inch-class tablets the Hummer H2s to the 10" H1s. Personally, when I pack for a business trip, I don't need another big piece of technology that's going to compete for space with my notebook. I either want a replacement or something small and complementary. And that's why the 7"-8" space is becoming more popular.

This time around, Apple isn't the incumbent, and that's a big deal. Its iPad mini goes up against the other smaller Android-based tablets out there, most notably Google's Nexus 7.

Deliberately ignoring the fact that the Nexus 7 sells for $199 with 16 GB of storage and Wi-Fi connectivity, Apple asks $330 for its iPad mini with similar storage and networking capabilities. As value seekers, we'd have a tough time getting over that premium, particularly since the mini is fairly accurately characterized as a scaled-down version of the iPad 2, which is almost two years old. They both employ Apple's A5 SoC and offer a similar 1024x768 resolution (which still doesn't qualify for Retina Display branding, even in a 7.9" form factor). Whether or not you consider the mini's Lightning connector an upgrade likely depends on how many accessories you own compatible with the old 30-pin interface.

We're not surprised, of course. "Apple tax" didn't become a thing because the company every made a conscious effort to compete based on pricing. But in this case, the difference is particular egregious. Most folks will probably agree that paying 65% more than a Nexus 7 is a tough sell...except for those who wear that "I overpaid" stigma as a badge of bourgeoisie ballerdom. Yes, the mini is thinner, lighter, and arguably appeals to an entirely different customer than the person shopping for a big iPad. But is that enough to justify $330?

Naturally, we know this isn't literally a miniaturized version of the iPad 2. The iPad mini actually shares a number of design cues with newer iOS-based devices. We're living in a post-iPhone 5 world, so the mini expectedly comes equipped with Apple's Lightning connector. This is considered a necessary evolution from the company's previous interface, but we have to admit preferring mini-USB for its ubiquity across the other tablets we use.

Like the 30-pin connector that preceded it, however, Lightning allows pass-through controls for automotive stereo systems and alarm clocks. And it's for that reason Apple's fans will continue tolerating a proprietary connector.

The anodized aluminum shell may be more of a shock to those who had grown accustomed to functional design decisions. The first-, second-, and third-gen iPads utilize bare aluminum enclosures that can be scratched if you don't take care of them, but do a stellar job of hiding fingerprints. This isn't the case any more. The smudges of oily fingers are blatant, and they're much more difficult to clean thoroughly.

Initial reports indicated that the mini was delayed due to yield issues with its anodized chassis, which could have been problematic. While it's common to cover the back of a phone, Apple's polyurethane mini Smart Cover leaves the larger rear surface exposed and vulnerable. Fortunately, we haven't had any issues with unsightly scratches in the month that we've been using our mini.

The 7.9" iPad also boasts upgraded cameras. Similar to the third-generation iPad, the mini employs a rear-facing 5 MP sensor. This is one feature that gives Apple's solution an advantage over the Android-based Nexus 7 and Kindle Fire HD, both of which lack rear-facing cameras. Is it enough to sway our initial impression? No. The folks we've seen taking pictures out in public with tablets look ridiculous. Chances are, if you're savvy and spendy enough to own a $330 iPad mini, you're probably on the iPhone 4S or iPhone 5 bandwagon as well. Pull out the smaller device and use its 8 MP camera. We have no problem with Google's decision to skip right over that feature, keeping costs down in the process.

Apple's front-facing 1.2 MP camera is a more noticeable upgrade. Using the Skype client, a 1.2 MP sensor is a solid step up from even the third-gen iPad's .3 MP camera.

Current page: Apple iPad Mini: You Want How Much For That Thing?

Next Page Apple's A5 SoC: Familiar CPU And Graphics Performance