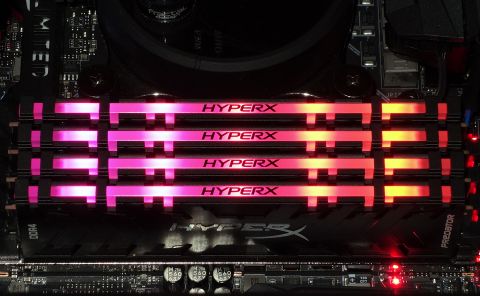 Industry-standard DDR4 RAM speeds go all the way up to a 2666MHz. So labeling an enhanced-performance kit at merely DDR4-2933 hardly seems the best way to get attention in the crowded high-end memory space. But the results we saw from Kingston/HyperX's HX429C15PB3AK4/32 when we dropped the kit into our test bench certainly got our attention--to the point that we can heartily recommend this kit to every overclocking performance enthusiast who can afford it. But at nearly $500 as we wrote this, you're going to have to really crave impressive speeds to splurge on this kit.

We see Kingston as one of the “old guard” brands of the consumer DRAM industry. Great service and a level of quality control that usually negates the need for great service are hallmarks of such brands. Recently introduced gaming-brand initiatives have demonstrated attempts to break away from those stodgy reputations, but the DRAM coming from these daughter brands--like Kingston's HyperX--has typically been rather mundane by the standards of our most enthusiastic readers. But this particular kit goes a long way toward changing our minds about that.

Appearing quite similar to HyperX Predator DDR4 kits, such as the recently-reviewed DDR4-3333, the difference between those kits and the one we're looking at here is visible at the top of the module, where translucent plastic replaces the standard black tops here. Advertised data rates are also slower, with DDR4-2933 and DDR4-2666 XMP profiles. And the highest automatic configuration for non-XMP motherboards is set at an unimpressive DDR4-2400. An XMP timing set of 15-17-17 at DDR4-2933 is a little slower than the 14-15-15 we’d prefer. But as we're about to see, that leaves superb capacity for overclockers and timing tweakers to play.

From the factory specs, Corsair’s Dominator Platinum SE appears to be the clear leader at DDR4-3466 CAS 16, but that kit’s lighting is merely monochromatic. Adata’s XPG Spectrix D40 looks like the closest competitor to HyperX Predator RGB, given the minimal split in data rates and RGB capability of both kits. We could still be in for some surprises though, since our review of the Ballistix Tactical Tracer RGB kit showed it to be more-overclockable than the Spectrix D40.

Spoiler: The HyperX Predator RGB overclocked well enough to return the DDR4-4000 column to our timings optimization table. Shown are the lowest primary timings at which each kit was completely stable over a variety of data rates.

While it took the better part of a day's overclocking to get there, we were able to bring the HyperX Predator RGB DDR4-2933 kit gradually up to its ultimate overclocked frequency, always suspicious that it wouldn’t reach the next multiplier. A specific sticking point with this motherboard was its inability to configure a bootable set of advanced timings for the DDR4-3866 setting, which meant we had to use a lower multiplier while gradually increasing base clock until we had reached so high a data rate that we were reasonably certain the DDR4-4000 setting would work.

DDR4-4080 is the highest data rate we've achieved on this motherboard with a 32GB kit, surpassing even the DDR4-4040 previously reached with our DDR4-3866 test kit. The board can run two single-rank DIMMs a little faster, but that would have gotten us to only 16GB.

That huge overclock helps the Predator kit slaughter its competition in the Sandra Memory Bandwidth test, sticking it to the fastest runner-up by 13%. Those who wish to live the wild life of overclocking need fear no evil from its second-place timings, though the lack of any revolution at DDR4-3200 or DDR4-2400 brings us back to reality in the Sandra Latency chart.

Our benchmarks attempt to represent both oddball extremes and ordinary scenarios. F1 2015 and 7-Zip are extraordinarily impacted by memory performance, and show the huge benefits possible with faster DRAM such as the overclocked HyperX Predator RGB, while Metro LL Redux and Blender CPU Render are typically only harmed by very slow configurations.

Most users will stick with XMP settings however, which makes the baseline settings here very unfortunate for such a capable, expensive kit. The pricing is a more realistic representation of this kit's capabilities than its specifications. Corsair's 32GB Vengeance LPX 2933, for instance, sells for over $100 less--though that kit does lack lighting.

We started out with the word “incredible” in our title, and it’s important to remember that the original meaning of that word is “not credible”. We’d love to think that every kit HyperX Gaming ships will have similar overclocking capability. But we're also fully aware of the possibility that we received an extraordinary review sample.

Frankly, either is possible. But we were encouraged upon closer inspection to see that our set uses the same Hynix H5AN8G8NMFR-UHC DRAM ICs that other reviewers and consumers have reported. We still wonder how typical this performance performance is. But since what we achieved is so impressive, we encourage every overclocker who wants a fast RGB 32GB DDR4 kit--and can afford this model's nearly $500 asking price--to try out this kit, push it to its limits, and report your findings in our response thread below.