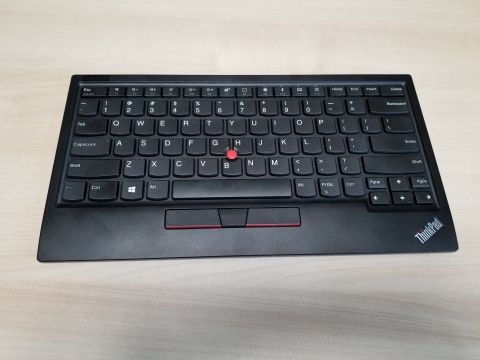 A great choice for working on Raspberry Pi projects or attaching to the TV, the ThinkPad TrackPoint II keyboard combines multiple connectivity options with a best-in-class typing and navigation experience.

Whether you’re sitting on the couch, typing into your set-top box / media PC, or at your desk, switching back and forth between a Raspberry Pi and your PC, a lightweight wireless keyboard is a very helpful tool. While you can get serviceable wireless keyboards for less than $30, most of these have mediocre typing experiences and uncomfortable touchpads, if they have pointing devices at all.

Lenovo’s ThinkPad TrackPoint Keyboard II offers a fantastic typing and navigation experience that’s familiar to anyone who has ever used one of the company’s popular business notebooks. It uses Lenovo’s famous TrackPoint pointing stick for navigation, which makes it much smaller than competitors that need to leave room for clunky touchpads. And it offers both 2.4-GHz and Bluetooth connectivity, so you can easily work on two different computers without constantly disconnecting and reconnecting.

At $85, the Lenovo TrackPoint Keyboard II is pricey for a wireless keyboard that’s not a gaming keyboard, but its compact size and unique pointing device make it ideal for anyone that needs a small, portable keyboard that can switch easily between devices.

Unlike most wireless keyboards, the ThinkPad TrackPoint Keyboard II has flip-out feet that raise the height of its back about 0.4 inches and give it a more finger-friendly angle. I really appreciated this added height and angle when typing on a flat surface but wish it could have gone even higher as my usual desktop keyboard can reach a height of 1.5 inches compared to the 0.9 inches of the TrackPoint Keyboard II. When I put my wrist rest in front of it, my hand was too elevated to type comfortably.

In a nice and very welcome touch, the ThinkPad TrackPoint Keyboard II has a small compartment under the back lip where you can store the 2.4-GHz wireless dongle when it’s not in use. I can’t tell you how many times I’ve lost dongles on other devices, simply because I had no obvious place to store them. Additionally, the backside houses two switches: one which lets you choose Windows or Android keyboard layout and another which allows you to change from 2.4 GHz to Bluetooth mode.

At 1.09 pounds (494g), the ThinkPad TrackPoint Keyboard II is light enough to carry anywhere, but it’s a bit heavier than the K400 (0.86 pounds, 390g) and about on par with the K83 (1.06 pounds, 481g). Unlike the K400, which uses disposable batteries, the TrackPoint Keyboard II and Corsair K83 both have built-in, rechargeable batteries so they are going to take up some weight.

The ThinkPad TrackPoint Keyboard II has a familiar aesthetic you’ll find on any ThinkPad notebook. The smile-shaped keys and the base are a raven black while the bright red TrackPoint and the TrackPoint buttons add a few dabs of red. The flip-out feet also have some red.

The keyboard has a typical notebook layout with a full function row and arrow keys, but no number pad and no dedicated media control keys. As on a laptop, the top function keys (within Windows) will allow you to lower or raise the volume, mute your mic and control brightness, among other things. Unfortunately, there is no backlight.

The ThinkPad TrackPoint Keyboard II offers two means of wireless connectivity: 2.4 GHz and Bluetooth. As is always the case, the 2.4-GHz setting is the easiest to set up; you just plug the dongle into an open USB port on any device and it works right away, no software or setup required. Even if you have a Raspberry Pi that you’re booting up for the first time (and haven’t had the chance to set up Bluetooth yet), this keyboard will work with no effort at all.

Pairing via Bluetooth is almost as easy. Simply move the wireless switch on the keyboard to the right for a second, watch as the status light blinks white and then follow instructions on  your computer (or other device) to complete the pairing. In our case at least, these instructions always included typing a code into the keyboard and hitting enter.

The ThinkPad TrackPoint Keyboard II also supports Swift Pair, a feature in Windows 10 which notifies you that there’s a Bluetooth device in pairing mode nearby and asks if you’d like to pair with it. This is a minor convenience as you could just navigate to the settings menu and initiate pairing from there, but it still saves you a few clicks.

Transitioning between the two wireless connections is fast and seamless. In my experience using the keyboard over the course of a few days and switching back and forth between Bluetooth on my PC and 2.4 GHz on my Raspberry Pi 4, the keyboard became responsive as soon as I toggled the wireless mode switch.

The tiny switch itself feels a little delicate, which makes me wonder if it could wear out with constant back and forth switching. I wish that, like the Corsair K83, the TrackPoint Keyboard II allowed you to switch modes via a key combination. I also wish that the TrackPoint Keyboard II allowed for more than one Bluetooth profile, so that I could use it with a third or fourth device.The Corsair K83 supports two Bluetooth profiles and 2.4-GHz connectivity. If you have a desk or table full of computers and Raspberry Pis you are working with, you want to be able to use the same input device, without unpairing or moving the dongle from one to another.

Typing and Navigation on the ThinkPad TrackPoint Keyboard II

Lenovo ThinkPads have a well-deserved reputation as the keyboard kings, and the TrackPoint Keyboard II, which is basically a ThinkPad keyboard that’s been yanked out of the laptop, lives up to this heritage. The keys have a generous (for laptops) 1.8mm of travel and provide really strong, tactile feedback. The keycaps have an ever-so-slightly curved smile shape that makes them easy to locate by feel, and the texture of the plastic is pleasant to touch.

Using the 10FastFingers Typing Test, I managed a solid 98 words per minute, which is in my typical range, with a slightly higher-than-normal 6% error rate.

My only issues with typing on the ThinkPad Trackpoint Keyboard II -- and it won’t be an issue for many people -- is that it has no wrist rest, and its low height prevents it from being used with most third-party wrist rests. Most other portable wireless keyboards have this problem also, so the ThinkPad TrackPoint II is far from alone. However, if you want to use the keyboard on your desk and treat it as your main input device for hours of work, you might miss the wrist support you get either by having a laptop (where the palmrest is built-in) or by adding your own wrist rest (like the HyperX Wrist Rest). If the feet were about 0.5 inch taller (or you can find a way to prop the keyboard up further), the problem would be solved.

Not everyone loves Lenovo’s TrackPoint pointing stick, and if you have a hardened opinion that you dislike it, this keyboard clearly is not for you. However, if you have never used a pointing stick before or feel neutral about this input method, the TrackPoint Keyboard II provides a very compelling reason to love the nub. Because you have the pointing stick instead of a touchpad, the keyboard is much more compact. It also allows you to move your pointer without lifting your hands off of the home row.

And, once you learn to use it, the TrackPoint is extremely precise -- some would argue more precise than a touchpad. It was very easy for me, during testing, to target very small points in my PC’s GUI, like the bullet points on a menu, without overcorrecting as I often do on touchpads. The TrackPoint has three buttons below it representing left click, right click and a middle button for scrolling.

You don’t really need it, but Lenovo has a Windows application that’s appropriately named ThinkPad TrackPoint Keyboard II Software. Once installed, the app sits in your tray and, when you click it, lets you control pointer speed and assign the F12 key to perform a special action of your choice (by default, it launches a Lenovo webpage).

For those who have a non-Windows device and, therefore, won’t have this software, rest assured that you won’t notice a difference.

Lenovo claims that the ThinkPad TrackPoint Keyboard II lasts an impressive two months on a charge. While I didn’t have time to test that claim, I can say that I left it on for more than 10 days, never turning it off, and I got no indication of a low battery level.

The keyboard charges via its included USB Type-C port. Unfortunately, you cannot use that port to establish a wired connection with your computer.

Because of its multiple connectivity methods, tactile keys and extremely accurate pointing stick, the ThinkPad TrackPoint Keyboard II is an excellent choice for anyone seeking a lightweight keyboard for media center use or Raspberry Pi projects. Those who are looking for a full-time desktop keyboard may find its low height and lack of a wrist rest to be an issue, but that won’t bother everyone and putting a thick book under it can help.

If you need a premium wireless media keyboard and you don’t like pointing sticks, Corsair’s K83 is an excellent choice and it supports two Bluetooth profiles so you can easily switch among three devices. And if the price is too high, there are a slew of wireless portable keyboards on the market that cost less than $50, including Logitech’s K400. However, if you’re looking for the ultimate typing and navigation experience on a portable wireless keyboard, the ThinkPad TrackPoint Keyboard can’t be beaten.