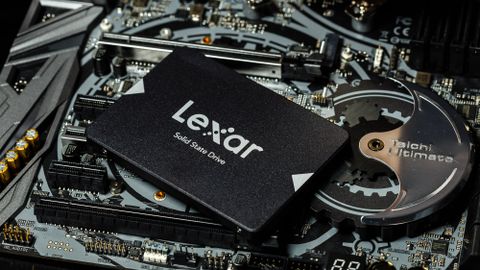 Lexar’s got a bunch of new SSDs in the market, but are they any good? Today, we check out their NS200, a SATA 6 GBps SSD that promises to deliver speeds of up to 550 / 510 MBps read/write and the ability to keep on chugging through all your applications with fairly high endurance capabilities. And, to top things off, the device is priced competitively, but it won’t deliver you all the value alternatives will as it lacks support software at this time, at least in the US.

Lexar, an old name in the storage industry known best for the company’s Jump drives is now the consumer brand for the Chinese company Longsys. With the recent adoption, the company now has a plethora of SATA and NVMe SSD products for anyone looking to upgrade their storage to flash. The NS200 is the company's fastest SATA SSD and after looking at the design, it becomes apparent why.

Rather than go the DRAMless route, Lexar’s NS200 boasts a Silicon Motion SM2258 SATA controller, which utilizes a DRAM cache, and Micron’s 64L TLC NAND. These are high-class components that have proven themselves in other SSDs like the ADATA SU900, Crucial BX300, and most notably the Crucial MX500. But, that’s not all. The NS200 is a SATA 6 GBps SSD that is available in three mainstream capacities: 240GB, 480GB, and 960GB. Based on these capacities, the company has also opted to increase the over-provisioning for added performance and reliability over usable space for the end-user, something their lower-tiered NS100 doesn’t.

Lexar’s NS200 supports a bunch of standard features such as S.M.A.R.T. data reporting, Trim, and secure erase support. Its endurance ratings are impressive for a SATA device. They aren’t as high as Samsung’s 860 EVO, but with LDPC ECC and some extra over-provisioning, figures come in at up to 480TBW for the 960GB model, surpassing that of the WD Blue 3D and even Crucial’s MX500. What it lacks, however, is a 5-year warranty, rather it features just a 3-year warranty like most cheap SSDs.

Lexar includes their own SSD Toolbox for download on their website, Lexar SSD Dash. It provides up-to-date drive health, drive condition, and S.M.A.R.T status information to help you monitor the device.  However, unlike most manufacturer’s they do not offer any free cloning software. As well, at the time of writing, the download for their software is unavailable in the US due to government requirements blocking it.

Lexar’s NS200 comes in a 2.5-inch form factor and is 7mm thick, like most other 2.5-inch SSDs. Looks-wise, the design is clean and well branded, it won’t take away from aesthetics like WD’s Blue 3D can, but the case is all plastic. Thus, it is rather easy to twist and bend, unlike Samsung’s 860 series and Crucial’s MX500 SSDs which feature a full metal case. Not a huge deal-breaker, but it’s not on par feel wise.

Within the case is a small, half-sized PCB with four of Micron’s 64L 3D TLC NAND flash chips that have been labeled as Lexar’s own. Managing the flash, we see Silicon Motion’s SM2258 SATA controller, one that features a DRAM cache for accelerating access to the FTL map, which helps to keep up performance, even under strenuous workloads. For this task Lexar has opted to utilize a bit of SK Hynix’s DDR3 memory, which is more than fast enough.