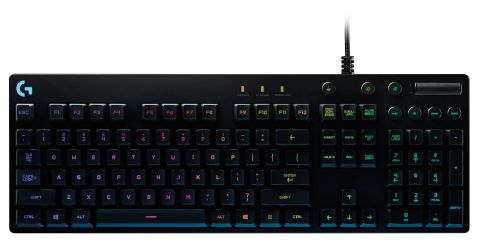 For some reason the G810 is rated for 26KRO instead of the more common NKRO. It’s unclear why Logitech chose to go this route, although because you have only 10 fingers, 26KRO is functionally going to be more than sufficient.

Although Romer-G switches are quieter than Cherry-style switches, one issue you’ll find on the G810 is a little extra ping noise. To be fair to Logitech, it’s possible that the reduced switch noise makes it so that the ping is more apparent, but in any case, it’s quite noticeable (we noticed some of the same on the Cherry MX-equipped G610 Orion Brown).

For the sake of your coworkers, gentle pinging that only you can hear is preferable to clicks and clacks that echo across the office, but if high-pitched metallic noises drive you bonkers, don’t say we didn’t warn you.

The charts below represent testing performed on the switches that are mounted on this keyboard. For a primer on the what, how, and why of this testing, check out Mechanical Keyboard Switch Testing Explained.

The squiggly line is the press, and the smoother line below it is the rebound.

The dotted gray lines show a given switch specification as provided by the switch manufacturer. They’re not a measurement; they’re merely a reference. For the metrics we can measure, they’re present to show how closely the switch performance matches the manufacturer spec. Some specifications we cannot measure, but we’ve shown them here so you can see what they’re supposed to be, at least.

The black line is the force curve of a single switch on this keyboard, chosen at random. The graph gives an indication of the kind of keyfeel you can expect from the keyboard.

As you can see, the maximum force of about 60gf is not that much more than the starting force of approximately 40gf, meaning that the trajectory is quite flat. In other words, the weight required to bottom out the switch is only a little bit more than what’s required to get it moving at all, so the switch won’t feel like it’s pushing back all that much, feeling more spongy than springy. (Note that although Logitech stated that bottom-out force for Romer-G switches is 80gf, which would make for a more marked keyfeel trajectory, our tests clearly show that the bottom-out force is actually only about 60gf.)

All of the forces required throughout the keypress are also quite low, meaning that it is a light switch and won’t require much effort to push. Moreover, the vast majority of the key travel is in a straight line, so the keyfeel will have a strong linear character. At 3mm, the travel is rather short, so the keyfeel will feel shallower than most other full-travel designs (which are usually 4mm).

Furthermore, you can see the tactile bump in detail. The difference between its peak force (~48 gf) and the subsequent low force (~39) is quite small, meaning that the switch has weak tactility. The difference also takes a long time to achieve, from approximately 0.7-1.2mm, meaning that the tactility is gradual and rounded, akin to a rubber dome, more than sudden and sharp, as one would expect of mechanical switches. This further reduces the sensation of tactility in a switch.

All in all, the force curve shows the Romer-G to be a fairly light switch with a shallow and predominantly linear character and very weak inherent tactility.

Looking at the median, the Romer-G switches required less force to get over the tactile bump that Logitech stated. The spec says you’ll need 55gf tactile force, but the switches required only approximately 48gf. The actuation force is stated to be 45gf, and if we assume that the stated 1.5mm actuation point is accurate, the Romer-G switches as a whole were nearly spot on - they required about 43gf to actuate.

We can confirm that on the whole, Romer-G switches do appear to bottom out right at 3mm (as stated in the specification).

The range shows the gap between the maximum and minimum force required throughout the travel, taken from all of the standard switches. For reference, we’ve included the median, and for clarity, we’ve omitted the rebound.

The Logitech G810 Orion Spectrum’s Romer-G keys show quite a wide, but relatively consistent, force gap. At its widest, the gap is  ~37-70gf--a delta of about 33gf. The gap is the smallest right around the tactile bump (~42-53, just an 11gf delta).

Note well, though, that the median is much closer to the min than the max. This tells us that only a minority of switches registered such high force throughout the travel; most were closer to the median.

This chart shows the force curves of all of the standard keys--the stabilized key force curves have been omitted. It’s apparent that there are several outliers.

Perhaps the most egregious offender is Num6 (the number 6 on the numpad). At about 1.25mm into the travel, it requires a whopping 72gf--which is about 30gf higher than the average at that point in the travel. Bear in mind that on average, the rest of the switches required just 42gf at 1.25mm. Num1 has the same issues, but it’s not as far off of the average.

Num4 isn’t far behind; at the actuation point, it required about 65gf, which is fairly far off the average 44gf, and then the force stayed high all the way until the end of the travel. The period key has a similar force curve, although the discrepancy between it and the average is not as pronounced.

Num9 and the single quote key (‘) are similar, although after the too-high force at the tactile bump, it dropped down to close to average before nudging back up.

Num5 has the opposite problem of Num6 and Num1--it has a sharp dip in the force required at 0.9mm into the travel. The average force at that point is 47gf, but Num5 is at just 37gf. Oddly, it then bounces back, shooting above the average force and joining the other numpad outliers; at the actuation point, it requires 57gf instead of the average 44gf. The sharp dip and leap in Num5’s travel could be an indication that the stem of shaft of the switch has a rough spot.

The tactile bumps of the Z, M, and ArrowUp keys are all a later than the average, and they all require a bit more force towards the end of the travel than average. The G, PgDn, and NumDiv (“/” on the numpad) are more accurate in terms of the average distance to the tactile bump, but like Z, M, and ArrowUp, all three show that they needed more force than average towards the end of the travel.

As we mentioned, the stabilized keys will essentially never produce force curves identical to standard keys. First of all, they have stabilizers under them on the far left and right sides of the key, and that’s where you’ll find wide variation in performance. Further, we tested these keys by placing the probe precisely above the switch; in real life usage, you probably won’t strike these wider keys precisely on-center. That means many key strikes will land at least slightly left or right of the switch; therefore, although our testing reveals that stabilized keys produce somewhat different force curves than standard keys, your real-life results will likely be even further off.

In any case, here we can see significant swings in both force and travel performance.

First off, note that all but the Spacebar reach the end of their travel earlier than 3mm, between approximately 2.7-2.8mm.

None of the stabilized keys really follow the force curve of the standard keys. Backspace is actually rather close, save for the shallower total travel. The others aren’t; they almost all hit the tactile bump later than the standard keys, even as they have a shallower full travel. They almost all require greater force to reach the end of the travel--the right Shift key is the most notable outlier there. At the tactile bump, it’s just a few gf high, but then after the actuation point it soars upward. By the time it reaches the end of the travel, it requires almost 83gf, which is about 20gf higher than the median.

The Left Shift key doesn’t have such a sustained extra force issue, but it does have an odd hitch at about 2.3mm into the travel.

Prev Page Software, Lighting & Teardown
5 Comments Comment from the forums
Be In the Know