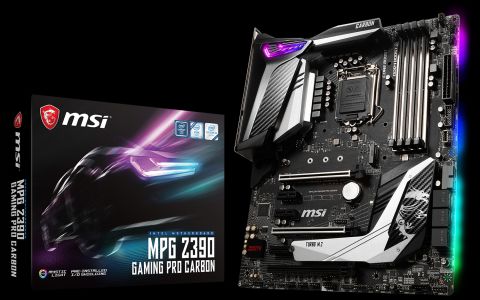 Priced just a bit higher than the board it replaces, MSI's MPG Z390 Gaming Pro Carbon comes with the extra power needed to overclock the Core i9-9900K. Those looking for a good balance of performance, affordability and features should take note.

With a $20 price drop from its $220 MSRP, the now-$200 MPG Z390 Gaming Pro Carbon resembles the Z370 Gaming Pro Carbon it replaces in price as much as in layout. The reasonable price brings with it an extra bit of power to support Intel's new flagship Core i9-9900K processor--and that’s just enough to equal the value of its moderately-priced predecessor.

Obvious changes from the previous-generation Z370 model include the MPG moniker, which stands for "MSI Performance Gaming," a smaller RGB section on the I/O section’s top cover, and a lower M.2 drive cover that gets more integrated into the design, as opposed to the Z370 Gaming Pro Carbon's standalone cover on the top M.2 slot. Less obvious with the MPG Gaming Pro Carbon is the Gen2 front-panel USB 3.1 connector, which gets its 10Gb/s interface from the new Z390 chipset’s integrated controller.

Intel released modified versions of its mainstream chipset IC earlier in 2018 with the H370/B360 launch, and we believe that the Core i9-9900K’s heftier power requirement was the main reason the company held back its launch of flagship Z390 PCH. That strategy assured that motherboard designers would have ample time to produce new boards with larger voltage regulators. But finding additional new parts on the MPG Gaming Pro Carbon’s design required some digging.

Where the Z370 Gaming Pro Carbon had four doubled phases (via parallel MOSFETs) for the CPU core and two for the integrated graphics (iGPU), the MPG Gaming Pro Carbon has five doubled phases for its CPU core and one for the graphics silicon. That means we’re seeing six groups of MOSFETs on each board. Converting an iGPU phase to a doubled CPU phase required the addition of only one MOSFET and one choke. Based on phase count alone, the core gets 20 percent more power and the iGPU half as much. MSI said that the iGPU didn’t need that much power, and we’d agree that buyers who rarely use the CPU’s integrated GPU are unlikely to overclock it. MSI would also like us to label the new voltage regulator an 11-phase design. And since its competitors likewise use parallel MOSFETs to double their phase counts, we reluctantly agree.

Compared to the Z370 model it replaces, the MPG Z390 Gaming Pro Carbon upgrades two USB ports to 10Gb/s (from 5Gb/s) and loses two 5Gb/s ports. The increase in USB 3.1 Gen2-spec ports is courtesy the Z390’s integrated controller, and the loss of rear-panel connectors can be blamed on the presence of a Gen2 front-panel connector that was missing from the earlier board. Other I/O changes include a factory-installed I/O shield and a blank space between the Gigabit Ethernet port and audio jacks, behind which resides an empty Key-E/CNVi slot for the -AC model’s Wi-Fi module. If you want Wi-Fi, the MSI MPG Z390 Gaming Pro Carbon-AC costs $20 more than this board, or about $220. DisplayPort and HDMI outputs for integrated video, five analog jacks and one digital optical audio output carry over from the previous-generation MSI model this board is replacing.

More than just a cosmetic upgrade, the MPG Z390 Gaming Pro Carbon’s new M.2 heat spreader design makes sense because the lower M.2 slot is potentially subject to greater heat (from the nearby graphics card) than the upper slot (which sits above the first graphics card slot). Heat for the second M.2 slot should only be an issue, though, when installing a second graphics card. Note, though, that adding a second card in this x16 slot robs half the CPU-based PCIe lanes from the upper slot (x16/x0 to x8/x8 conversion). Dropping in a third graphics card is also supported for CrossFireX but not SLI, since the lower x16-length slot gets only four lanes from the chipset. Those who want multi-card setups with maximum bandwidth will still have to look to pricier platforms like Intel's X299/Core-X or AMD's X399/Threadripper.

Six SATA ports and one front-panel USB 3.0 header face forward to allow the fitment of cards that are longer than the motherboard, and the two fan headers we didn’t mention above are located at the upper-right and lower-left corner of the CPU cooling area to ideally fit a traditional CPU cooler and case exhaust fan. We didn't find any fitment issues overall, apart from the upper PCIe x1 slot being covered by the coolers of most graphics cards--and the same issue also applies to the lower x1 slot when two graphics cards are installed. MSI even spaced the two CPU-connected x16-length slots apart three spaces to aid airflow to the graphics coolers. This layout, though, means that placing a graphics card in the third x16-length slot will typically require the use of an eight-slot case, whereas the ATX standard has only seven expansion slots.

Next Page Software & Firmware
4 Comments Comment from the forums