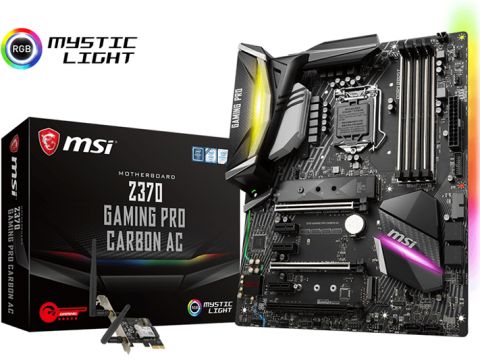 Enhanced features give the Z370 Gaming Pro Carbon AC a little more value than its most closely priced competitor.

What does $200 get you? By way of comparison, the number of added features is akin to the $180 boards of yesteryear and the $160 boards of Tom’s Hardware’s earliest days. We find a reasonably oversized voltage regulator, a few high-end codecs, and a couple extra controllers. In the case of MSI’s Z370 Gaming Pro Carbon AC, those controllers are USB 3.1 Gen2 and Wi-Fi.

Unlike most competing boards, the Z370 Gaming Pro Carbon AC’s Wi-Fi comes on a PCIe/USB to M.2 Key-E adapter card. The module is worth over $20, and adapter cards with the module are generally priced a few dollars higher, yet the Z370 Gaming Pro Carbon AC costs only $10 more than its non-Wi-Fi version: Could this be the starting point of good value?

Since you are using graphics cards, you’ll be pleased to see that the two CPU-fed PCIe slots are reinforced to reduce the chance of damage that often occurs when moving around a PC with extra heavy graphics coolers. Spaced three slots apart to make room for large card coolers, these two slots switch from x16/x0 mode to x8/x8 modes when a card is detected in the second metal-shrouded slot.

A third x16-length slot is fed with four lanes from the PCH. Though technically compatible with 3-way CrossFireX, we prefer to have all of our graphics cards on the same controller. The Z370 Gaming Pro Carbon AC also has three PCIe x1 slots, and this is where we question the inclusion of the Wi-Fi adapter card: If the two graphics cards you’re using are more than 40mm thick, you probably won’t have a place to put it. If your card thicknesses are 40mm or less, you’re stuck sticking the adapter in either the black x16-legth slot or middle x1 slot. Putting it in the middle x1 slot means wrapping its USB cable over the top of the second card to a header on the board’s bottom edge. Meanwhile, the top x1 slot will be covered up by all but the thinnest of graphics cards, which causes us to question its dedicated resource.

The only reason we’d need to question the implementation of a dedicated resource to a slot we can’t use would be if the board had a resource shortage, and here’s the shocker: All feature-packed Z370 boards have resource shortages. In this case, the lower M.2 slot steals two HSIO resources from SATA and transfers them to PCIe, unless the M.2 card is SATA, in which case it steals only one port. On the other hand, the upper M.2 slot is fully provisioned for PCIe, stealing a SATA lane only when the M.2 drive is SATA.

Four SATA ports and a USB 3.0 header point forward along the front edge, in front of the cards. A second USB 3.0 header is found next to the main power jack, and uses a perpendicular connector since it’s not in the way of any cards. Similarly, the two other SATA ports along the board’s bottom edge are perpendicular, because you’re probably not going to use that bottom slot for a graphics card.

The bottom edge also contains, back-to-front, a front-panel audio, RGB LED, PWM-style fan, TPM, LED power indicator, PC Speaker, Front-panel button, two USB 2.0, and Rainbow LED headers. In the midst of those headers is a demo button for on-board RGB LEDs and a jumper to change the function of the demo button.

A second standard RGB LED header is found next to the EPS12V connector, and a special Corsair LED strip connector is located near the top front corner. Many readers have asked us not to talk about RGB connectors in terms of value, but other readers will certainly be able to appreciate the breadth of connectivity.

The Z370 Gaming Pro Carbon is packed with cables: Though SATA is limited to one straight and one right-angle cable, it also includes an 80cm RGB splitter cable, an 80cm Rainbow LED extension cable, a 50cm Corsair HD RGB LED extension cable, and a USB cable for the M.2-based Wi-Fi module.  Buyers also get an HB-SLI Bridge, the Wi-Fi adapter card with installed module, two Wi-Fi antennas (the Brits will hate me for that), an I/O shield, a sheet of cable labels, a quick install guide, a full user manual, and a driver/application disc.

Next Page Software & Firmware
2 Comments Comment from the forums