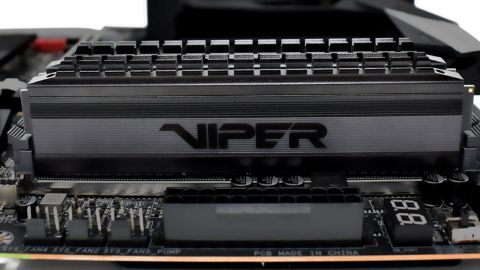 Patriot’s new Viper 4 Blackout doesn’t stand out for its performance or tweakability, and even its price is close to class average. Lacking anything other than its dark, non-RGB aesthetics upon which to make a recommendation, it's tough to recommend highly. But if in-stock pricing falls below MSRP, it may be well worth considering.

Patriot’s new Blackout series trumpets Ryzen 3000 compatibility and a new all-black finish while providing data rates up to DDR4-4000. The DDR4-3600 we snagged also happens to be at the highest data rate that most technical types recommend for the Ryzen 3000 series, making this arguably the most-appealing model  before we even removed it from the box. On the other hand, the DDR4-3600 competition is so tight that buyers might just pick this kit (or something else) just for aesthetics or based on brand reputation.

The first thing we noticed when Patriot decided to trumpet its Ryzen 3000-series compatibility with a new Viper 4 Blackout series was that that apart from the color scheme, several of these kits appear identical to the red modules that came before it. There’s more to this story, though, as DRAM ICs and even PCBs get updated as old components go out of production and are replaced. Buying from the new series assures that you’ll get the freshest stock.

Our modules are so fresh that they aren’t even in stock at the moment as we write this review. So we're using this kit's (part number PVB416G360C7K) $120 MSRP to deduce comparative value and hoping that we’ll have stock will arrive by the time this review is published. Inside the package are two black-adorned DDR4-3600 C17 modules and two Patriot Viper case stickers.

The full XMP timing set for its DDR4-3600 profile is 17-19-19-39. CAS 18 becomes the number to beat in a market where we label “low latency” anything with less than one cycle of latency for every 200 MHz data rate. This kit’s 19-cycle tRCD and tRP timings combine with a tCAS of only 17 cycles to sit on the fence, though the moderate price should give it a slight value bump compared to better-rated kits.

Users whose motherboards don’t support XMP will be stuck at DDR4-2133 CAS 15 until they’re willing to learn how to manually adjust their memory for optimal performance, but our tests will provide some numbers to help you get started there. Our manual optimizations start at DDR4-2666, which is where some platforms (Intel B/H series motherboards and most of its current non-K-series desktop processors) stop.

One of the biggest memory performance divisions we’ve recently seen has been between kits that have two or four ranks of ICs (chips). All 8GB modules we’ve tested for the past two or more years have been single rank, so the only fair comparison parts must contain two 8GB DDR4-3600 modules. Since we haven’t reviewed many of those in non-RGB versions, we’re instead comparing similar-spec RGB kits and will note the RGB/non-RGB price differences in our final analysis.

The Hynix ICs of the Viper 4 Blackout must be a different version than we used in our X570 Ace review, as a pair of those modules were stable all the way up to DDR4-4400. Not that DDR4-4266 is a bad result, but it’s a tick behind the B-Die ICs of the Spectrix D60G and Patriot’s earlier Viper RGB kit.

The Viper 4 Blackout kit performs well in Sandra Memory Bandwidth, but still gets edged out by the XPG Spectrix and elder Viper RGB kits and merely matches the XCalibur RGB at most settings.

We have to scroll through to the Blender bench before we see an oddity where both Viper kits are consistently slower than competing modules at everything but XMP ratings. This is mostly a matter of a few milliseconds that either round up or down, but it’s still consistent.  Blackout also falls to third place in 7-Zip file compression, which is the most important metric on this platform since the memory-bottlenecked F1 racing game also appears to be CPU bottlenecked by our 4.20GHz fixed frequency.

Patriot’s Viper 4 Blackout kit is at least $5 cheaper than the compared RGB kits, and that would be enough to give it a 4% value lead even without the performance advantage is has over XCalibur RGB. But one remaining problem for the Viper 4 Blackout is that, being only $5-10 cheaper than RGB kits, it faces tough competition against even cheaper non-RGB kits.

So small a price difference makes us continuously reconsider the Viper 4 Blackout’s tiny performance deficit. It’s almost small enough to forget, but so is the price difference. And as much as we like the look of the kit and the reputation of its producer, that kind of statement has us awash in indifference. Perhaps once this kit actually arrives in stock, its price will tick a little higher or a little lower, making it easier to pin as a good value or a kit worth skipping.