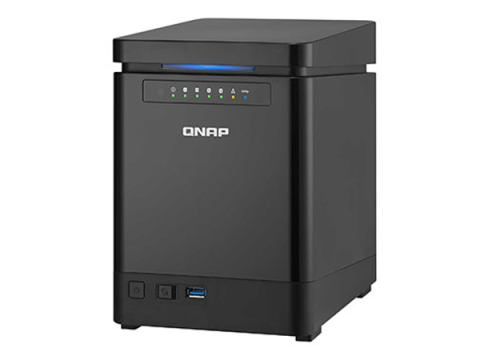 The QNAP TS453mini takes the top spot on the SMB/CIFS workload charts only once. The system does lag behind some of the others in a few tests by a larger margin than we would like to see. Still, the performance is acceptable for a small four-bay tower NAS.

The multi-client test moves us away from the Quanta CiB system and over to 10 dual Xeon servers loaded with two Hotlava Shasta NICs each that supply 12 gigabit-Ethernet ports per server. Through the magic of Hyper-V, each server mimics 12 office-class desktops that run workload scripts with real Microsoft Office software applications on the device under test.

In this test, we've taken advantage of the dual network interface on the QNAP TS-453mini. In dual NIC mode, we used the 802.11ad protocol, also known as Link Aggregation. We also tested the TS-453mini with a single network interface.

The QNAP TS-453mini delivers exceptional throughput that reaches peak performance at 24 clients. The latency holds steady all the way to 56 clients but quickly skyrockets up from the stress on the CPU from the small file reads, modifies and writes.

QNAP's iSCSI engine is very good. We've yet to see poor iSCSI results from any of the company's products, even the very low-cost units designed strictly for home users.

In the end, the QNAP TS-453mini outperformed most of the other products in the iSCSI desktop workloads running from a mounted volume. The ASUSTOR AS7004T with a Core i3 processor was a bit faster. The AS7004T didn't run away from the TS-453mini as much as we expect and not by enough to justify the additional expense.

Until this point, the QNAP TS-453mini delivered very consistent performance without large peaks or valleys in the results. That carries over to the traditional-server workloads, in which we see very little deviation regardless of the queue depth applied to the load. The system is able to absorb additional workload but doesn't increase the IOPS performance. The latency does increase, though, an attribute we can see in the snake charts.