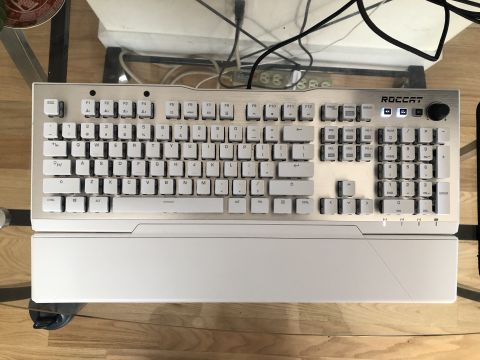 With a striking white build that also caters to RGB, the Vulcan 122 Aimo will brighten up any gamer’s setup. Tactile Roccat switches are good for typing, but the distance between the keys and the high price are drawbacks.

Whether you have a white PC build to accommodate, are looking to evoke Apple’s premium styling, or just want something to liven up your desk space, the Roccat Vulcan 122 Aimo is one of the best gaming keyboards. This full-sized keyboard has a high-end look that’ll steal the show -- even when the RGBs are off.

With the Vulcan 122 Aimo, Roccat looked to forge a reliable gaming partner by using homegrown switches with shorter travel than traditional Cherry MX ones. But at $160 at the time of writing, this is an expensive mechanical keyboard.

Roccat used its pretty stick on the Vulcan 122 Aimo, resulting in a good-looking, full-sized gaming keyboard. Without heavy lines, a polarizing shape or aggressive layout, the Vulcan 122 Aimo still says ‘gaming,’ but in a more mature tone.

The Vulcan 122 Aimo and Vulcan 121 Aimo are essentially the same keyboard, but the former comes in white and the latter in black. Both versions have an anodized aluminum top plate, but on the white model this effect is much more striking. The silver brushed metal runs across the plastic base of our review unit, anchored by visible screws that give it an industrial touch. If you want a keyboard that’s colorful and noticeable before your turn on the light show, this is it.

If a white and silver keyboard isn’t stylish enough for you, Roccat ups the ante with a floating keycap design that makes its transparent RGB switches scream for attention. This elevation lends for brilliant RGB effects that reflect off the silver top plate and into my heart. With Aimo, Roccat’s RGB tech that’s supposed to be reactive and improve the more you use it, the colors are often changing at whim, so it’s easy to get distracted by the light show.

The dished curve in the vast majority of the plastic caps help fit your fingers and are very cozy. Roccat placed bumps on the F and J keys for home base, as well as the W key for gaming. The bottom row of the main keys don’t have dipped keycaps like the rest. Instead, they’re concave. I prefer consistency, but this wasn’t distracting when typing.

Roccat used thin, shortened keycaps that are supposed to help with cleaning. The vendor’s  switches, meanwhile, are purportedly dust-resistant, but with all the exposed space between the keys, it wasn't surprising to see dust accumulate after a couple weeks of use.

Roccat’s chosen font is mildly blocky but less jarring than what many gaming keyboards go for these days. Its symbols are a little more playful, and I like the use of highlighting to emphasize the Game Mode and macro buttons.  However, decoding some buttons, like the tab, shift and caps locks, may take a moment.

The magnetic palm rest, stamped with a nearly invisible Roccat logo, is a thin, flimsy thing that doesn’t offer much support. You’ll want to upgrade to something more substantive, like the HyperX wrist rest.

With its thin frame, the Vulcan 122 Aimo can lay nearly flat against the desk, but it also has flip-out feet. The keyboard’s plastic base is lightly textured and thin, but numerous rubber strips kept it in place during aggressive typing or gaming.

For this price, we’re relieved to see media keys, including a volume dial with a notched feel to its adjustment. However, a play/pause or fast forward/rewind buttons would’ve been much more convenient than an FX button, which turns the RGB brightness darker or brighter, depending on which way you turn the volume wheel (the button is programmable, thankfully). It’s also annoying that the volume media button flashes when sound is muted.

Our review unit came with Roccat’s tactile mechanical switches, but it’s also available with linear ones. With the tactile switches, there’s a discernible bump as the button actuates before traveling a little further and bottoming out. The keyboard’s plastic keycaps make a pleasant clacking sound when activated, but the switches are silent, just like traditional Cherry MX Brown switches.

Roccat’s homegrown tactile Roccat Titan switch has 3.6mm total travel distance and actuates at 1.8mm versus Cherry MX Brown’s respective 4mm and 2mm. Roccat claims its switches are also designed to fight debouncing and be stable. Although the keycaps can feel thin, the switches themselves felt just as sturdy as those on any other mechanical keyboard of this price. While the keyboard’s thinner keycaps make a snapping noise with each press, the tactile Titan switch still lacks the loud clickiness of something like a Cherry MX Blue.

In a blind test between Roccat’s Titan tactile switch and the Cherry MX Brown, it’s hard to notice a difference. Sometimes I felt the bump was more pronounced on the Roccat Titan switch, perhaps because the total travel is shorter.

I prefer using tactile switches for typing, and the Vulcan 122 Aimo’s tactile switches were no different. With its pronounced bump and the snapping sound of those keycaps, it was a somewhat familiar experience. However, the keys are spaced further apart than I’m used to, which called for a longer adjustment period. The dished keycaps were comfortable during long sessions, but they sometimes felt thin and like they weren’t providing enough stability, especially with longer keys, like the numpad’s plus sign.

On the 10fastfingers.com typing test after a few weeks I averaged 106 words per minute (wpm) with a 90.4% accuracy rate. This is on par with my typical 108 wpm speed, but more erroneous than my usual 98% accuracy, which I blame on the distance between the keys.

Roccat says its switches use particularly programmed firmware to help fight debouncing and to read key presses at an earlier point after actuating than rivals for 20% faster input. You’d have to be pretty quick to notice that alleged 20%, but the Vulcan 122 Aimo is still a reliable gaming keyboard.

In Battlefield V, the amount of distance between the keys was handy, as it made it easier to identify keys without looking away from the screen. The bump on the W was also helpful in that regard. Overall, the keys’ snappy and quick bounce back after actuating proved great for fast input or movements.

Dished keycaps on the Vulcan 122 Aimo were particularly cozy when I had to press and hold the same button for a long time, such as when trudging through the mud for a series of stealthy assassinations.

In Overwatch, the Vulcan 122 Aimo offered similar performance, but when engaging in heavy battle and performing a lot of moves rapidly, I noticed how slick the keycaps can get. If your keyboard tends to get sweaty, you may want something with more textured keycaps.

The keyboard also comes with some desirable features (more in the dedicated section below) for gamers, including four easily accessible profiles via the first four FN keys that you can set to launch with individual games (or any other program). You also get six macro keys, which can come in handy for programming commonly used moves and have pre-set configurations for over 30 different popular PC games. Finally, Easy-Shift makes the key binding possibilities even greater by giving every main key a second function by holding the shift key.

The Vulcan 122 Aimo packs a 32-bit Arm Cortex-M0-based processor and 512KB of memory that lets you store up to four profiles. Each profile is easily swappable by holding down Fn and F1-F4. The free Roccat Swarm software makes it so profiles automatically engage with specific games, and includes the ability to remap almost every key on the board and program macros.

Through key assignment, you can program each key to a wide variety of different functions, including opening certain software and documents. The FX and volume key are programmable, but not the volume wheel or mute button. The macro manager lets you create different macros for 41 different programs, including games Battlefield V, Fortnite, Overwatch and Grand Theft Auto V and Photoshop and Skype. .

According to text in the Swam software, the Vulcan 122 Aimo’s titular Aimo RGB lighting reacts “organically to your behavior without the need for extensive configuration” and is enhanced by using other supported peripherals, like the Roccat Kain 200 Aimo. Aimo is supposed to get better the longer you use it. But after about 2 weeks of use, my keyboard had only reached 35% of its Aimo potential.

While the RGB looked great in Aimo mode, I didn’t notice it reacting to anything on my screen or in-game. I did a Google Image search for “purple” and watched the keyboard’s RGB slowly shift from orange and pink to a purple and bluish scheme, and sometimes searching for yellow would result in yellow and orange light. But the color scheme would always just keep shifting after a few seconds.

The Aimo setting also had each key change color when I pressed it, but I often wished it would react a little quicker, as my finger would usually be off the key already by the time the color switched. Sometimes the color wouldn’t change at all even though it actuated.

Outside of Aimo, the Vulcan 122 Aimo has seven additional pre-configured RGB effects, plus the ability to customize your own with per-key programming and the ability to make colors with red, green and blue values and control over effect, speed and brightness.

Swarm software also has features you might never mess with, like the ability to add clicking, “sci-fi,” “beam” and other sounds when typing.

The Roccat Vulcan 122 Aimo is a no-brainer for owners of a white system or gamers seeking a bold design that still looks classy (the black Vulcan 121 Aimo isn’t too shabby either). Roccat’s mechanical switches felt comparable to Cherry MX ones in my review unit, providing solid options for tactile or linear gaming.

The Vulcan 122 Aimo comes close to evoking a typewriter feel with its clacking keycaps and spread out keys. But those distanced keys may take some adjustment for typing, and the thinner keycaps sometimes felt less premium than expected for a keyboard that’s over $100. For that extra oomph in typing performance, consider the MSI GK50 Low Profile, which has clicky switches that are closer together but lacks media keys.

At $160, this on the pricier side of the spectrum for a mechanical gaming keyboard. But with its fashionable looks and modern featureset, the Vulcan 122 Aimo makes a well-dressed argument for your money.