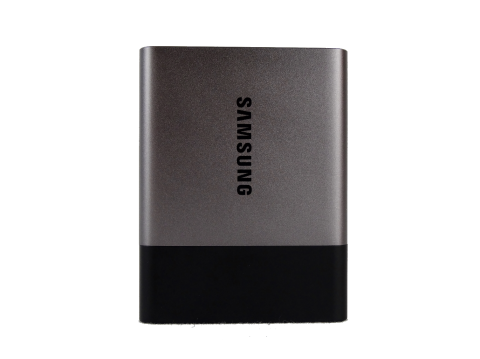 The Samsung Portable SSD T3 offers good looks and high performance in a compact size. Samsung didn't have a problem adding an awesome product tax when we wanted to see a better value for consumers. In time, the price will come down and that will make the Portable SSD T3 more attractive to more users.

Samsung is wasting no time putting its 48-layer V-NAND to use. Two products based on the flash are now shipping. First up is a 15.36TB monster in a 2.5-inch form factor with SAS connectivity. To reach that capacity, the company used 512 of the new 256Gb dies, packing in 16 per memory package. The new SSD is a work of engineering art—but so is the portable consumer version we're testing today.

Last year, Samsung jumped into this market with its Portable SSD T1. The first model (shown above, on the left) is just a little larger than a matchbook and scales up to 1TB of capacity. The T1 is an excellent product for a rookie endeavor, but customers found its small size and light weight to be, well, forgettable. Many folks sat on the one-ounce T1, or washed the thing with their laundry.

Samsung skipped right over the T2 for its second generation and names this new version the Portable SSD T3, making it twice as heavy in the process. A metal housing, secured with screws, also gives the T3 additional rigidity. Now you can sit on the drive without breaking it into pieces.

Many of the first- and second-generation capacities overlap. However, the T3 is available in a larger 2TB size. Most portable storage devices with that much room for data are significantly larger, so the Portable SSD T3 has a few strong selling points to boast about. And we haven't even gotten to the technical specifications yet.

MORE: How We Test HDDs And SSDsMORE: All Storage Content

You'll find the Portable SSD T3 in four capacities, including 250GB, 500GB, 1TB and 2TB. Inside each drive is a standard mSATA SSD with firmware optimized for external use. Samsung says all four versions are capable of 450 MB/s sequential transfers, though the drive may be limited by USB 3.0's 5 Gb/s data rate in certain situations. Even though the Portable SSD T3 employs USB Type-C, it operates at the same speed as the T1 with a mini-USB 3.0 connector. We hoped that Samsung would release a PCIe-based variant with a 10 Gb/s interface to the host, but that didn't happen.

The Portable SSD T3 does get a nice technology upgrade in the flash department, though. This is the first product from Samsung to ship with 48-layer V-NAND. The move from 32 layers to 48 is more impressive than it sounds, as density went from 128Gb to 256Gb. Over the long term, this new flash should cut the price of desktop SSDs almost in half. Sadly, the Portable SSD T3 isn't any more affordable than its predecessor.

Samsung also include a hardware-based encryption engine. The Portable SSD T3 uses AES 256-bit encryption, so your data is safe from prying eyes if you enable the feature and then lose the drive. Write down the password though; your information isn't recoverable if you need to reset the device.

Samsung covers the SSD T3s with three-year warranties. We looked for an endurance limitation in the company's documentation but didn't find one. Included software does not show the flash cell endurance, but third-party utilities will read the SMART data.

Samsung includes a paper document that walks you through the setup procedure, warranty terms and certifications. A USB 3.0 Type-A-to-Type-C cable is included with the drive, too. You don't get a cable that fits Android phones or tablets, though we did find them for sale online.

There are three files on the Portable SSD T3 right from the factory. Two are software packages—one for Windows and one for Mac OS. The third file is a text document with instructions for downloading Samsung's Android software from the Google Play store.

We tested the Portable SSD T3 2TB on Windows 8.1 and used the software found on the drive. It's very easy to navigate and serves only one purpose: to lock and unlock the device with AES 256-bit encryption. If you lock the drive on one computer, you need to install the software on another to unlock your information.

The drive ships formatted in exFAT. This file system works with both Windows and Mac OS. NTFS is supported, but is read-only on Apple machines. Conversely, HFS is also supported, though Windows doesn't recognize it at all.

Samsung sells the Portable SSD T3 online and at retail. The company gives potential customers a lot of useful information on the back of the package.

Unlike the previous-gen T1, the Portable SSD T3 is made almost entirely of metal. It weighs twice as much as the T1, but it's still very light and remarkably small. In contrast, the T1 was plastic and could split into three pieces if you dropped or sat down on it. The T3 uses two screws to secure the metal housing's internal structure. It's practically bulletproof. Samsung doesn't specifically advertise a crush rating like you see on some rugged devices, but we suspect the T3 could take a beating and still work fine.

We've tested other products with the USB Type-C connector and had issues with the cable falling out under minimal pressure. Until the Portable T3, Type-C was more of a hindrance than a useful feature. Samsung designed the connector so that it has three distinctive clicks when you insert or remove the cable. There is enough clamping force to secure the device under its own weight, which is a problem we've seen other manufacturers struggle with.

Next Page Benchmarks And Conclusion
5 Comments Comment from the forums