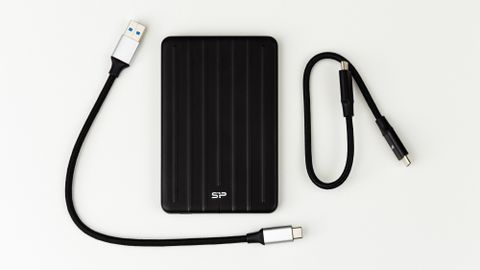 If you’re looking for a cheap external SSD that will keep up with you on the go, the Silicon Power Bolt B75 Pro does the trick. But it does have some quirks.

Capable of SATA-like speeds and available in capacities of up to 2TB, Silicon Power’s Bolt B75 Pro Portable SSD is both speedy and spacious. It even features encryption software for enhanced data security when you’re on the go. It’s also priced quite competitively, although it isn’t without its quirks.

Silicon Power’s Bolt B75 Pro is marketed as quite a durable device. The company says it’s military-grade shockproof, with a design that was inspired by a WWI-era German Junkers F.13 transport plane. And with military design in mind, it is quite secure with 256-bit encryption software for added security.

The drive features a standard three-year warranty, but lacks an official endurance rating at the time of writing. It is both Mac and PC compatible, as the Bolt B75 pro comes formatted as exFAT out of the box. Note, though, that our testing was completed with the drive formatted as NTFS.

The Bolt B75 Pro comes with two one-foot long USB cables, one type-C to type-C and the other type-C to type-A. Both power the device off the USB bus.

Silicon Power’s SP Widget software is compatible with this drive and available for download. With it, you can configure backups, enable the AES 256-bit encryption, and more.

The drive is easily disassembled via four Philips head screws. But while the housing is sleek it’s a bit less durable than we expected. The exterior features a lightweight aluminum-alloy finish, which we were able to bend rather easy. This is unlike much tougher LaCie externals drives we’ve tested in the past.

Opened up, we find inside houses a SATA-to-USB PCB featuring an ASMedia ASM234cm bridge chip and a SATA SSD that is secured using double-sided adhesive foam. Once we dig a bit deeper, we see that the Bolt B75 Pro is powered by a Silicon Motion SM2258XT SATA controller and Intel 64L TLC NAND flash. Being a Silicon Motion XT controller, that means this SSD does not feature any DRAM, which helps to help keep down cost, but can also negatively impact performance.