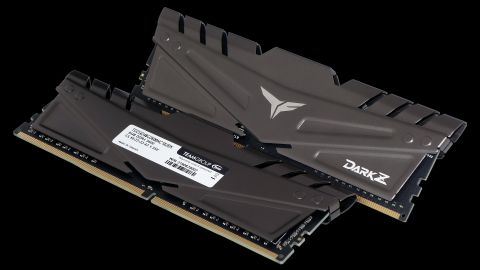 If you care about memory speed more than capacity, Teamgroup’s 16GB Dark-Z DDR4-3600 kit gives you a big bang for surprisingly few bucks.

Most of us have seen Venn diagrams where the circles don’t meet in the middle, with statement such as “Fast, Cheap, Stable” filling those circles. But what if you could have DDR4-3600 for only $15 more than competing mainstream DDR4-3200 kits? That’s what Team Group’s aims to deliver with its T-Force Dark-Z kit (model TDZGD416G3600HC18JDC01), a part number that’s improbably easy to decipher but impossibly difficult to remember.

Covered in aluminum heat spreaders stamped with a 3D design which oddly appears to minimize contact with the chips beneath, each kit includes a case badge and installation instructions. Anyone savvy enough to read this probably doesn’t need those instructions.

Concerning module programming, the good news is that this kit defaults to DDR4-2400 prior to setting XMP mode, where some competitors default to only DDR4-2133. A DDR4-2133 configuration is also available, if your system needs it.

The bad news: the 22-cycle tRCD and tRP of its DDR4-3600 XMP appears uncompetitive. Returning to the positive side, the 18-cycle CAS of this kit is good enough to at least call it “performance” RAM, since we define a “low latency” setting as less than 1 cycle for every 100 MHz frequency (200MHz data rate). If you need a refresher on what any of that means, you can check out the middle section of our PC Memory 101 feature.

T-Force Dark-Z DDR4-3600 reached DDR4-4266 on our AMD platform at timings that were barely worse than rated XMP settings. But as great as that sounds, it still fell behind the two competing kits. Fortunately for Team Group,the company’s kit is also cheaper.

Interestingly, the T-Sorce Dark-Z kit’s super-long XMP latencies aren’t nearly a requirement for the stability of our system. We pushed those all the way from 18-22-22-42 to 16-18-18-36 without issue. With CPU and GPU overclocking often delivering diminishing returns, it’s a shame that so few casual overclockers take the time to optimize their memory.

Bandwidth differences between these three kits are too small to cause most buyers to care at XMP settings, so they probably won’t care that the Dark-Z took third place. The same is true in Sandra Memory Latency.

T-Force Dark-Z also loses in most of our gaming tests, but again by margins that are too small to elicit a buy-or-deny response from most builders.

XMP performance losses in are slightly more noticeable in 7-Zip, but still not enough to make most buyers care. Heck, t0he T-Force kit even creeped up to second place when all three kits were tuned to their tightest stable timings.

The key to the T-Force Dark-Z’s marketing is that this memory is cheap enough to make cautious buyers question its quality, yetstill carries the same type of lifetime limited warranty that most of its competitors boast. Combining that low price with mediocre timings for its high data rate, we have no problem recommending it as a value pick for performance enthusiasts.