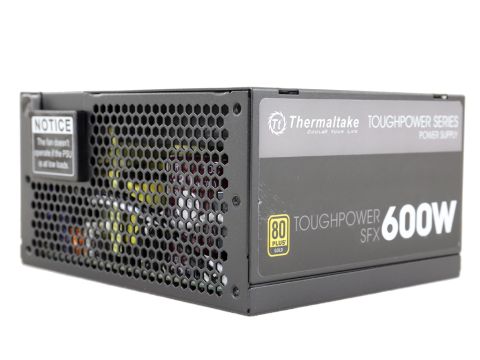 The PSU's OEM is Enhance Electronics, and the platform Thermaltake uses is the same one found in SilverStone's SX600-G. The tiny PCB is overpopulated with components, making it hard to identify them. This means we have to desolder some parts in order to get a better view of others, such as the switching FETs. On the primary side, an LLC resonant converter is used for increased efficiency, while on the secondary side, a pair of DC-DC converters generate the minor rails.

The first part of the transient filter is installed on a small PCB that also holds the AC receptacle. We find two Y caps and a single X cap on this board. The EMI filter continues on the main PCB with two Y caps and a single X one, a CM choke, and an MOV (Metal Oxide Varistor). Right next to the MOV is an NTC thermistor, which provides protection against large inrush currents. Unfortunately, Enhance didn't use a bypass relay to help it cool down faster.

The single bridge rectifier, a Vishay BU1506, is bolted onto the same heat sink as the primary switchers, a pair of Infineon IPP50R140CP FETs. The bridge rectifier can handle up to 15 A of current, so it will easily support this PSU.

The driver IC that controls the main switching FETs is a Silicon Labs Si8230BD, installed on the solder side of the main PCB.

A large vertical board on the secondary side holds the PFC controller, a Champion CM6500 IC, along with the supervisor IC, a SITI PS223. This is among the few supervisor ICs supporting over-temperature protection out of the box, so we find it strange that this protection isn't listed in the PSU's specs. We'll run some additional tests to determine whether it's truly missing.

The LLC resonant controller, a Champion CM6901 IC, is installed on the front of the same PCB. This controller operates the main switchers in PWM mode under light loads, and switches to FM mode when demands increase.

Six IRFH7004PbF FETs generate the +12V rail. All of them are installed on the solder side of the main PCB and are mostly cooled by the chassis, which they come in contact with through a thermal pad.

The filtering electrolytic caps are of high quality; they are provided by Japanese manufacturers and have good specs. You see, capacitor origin isn't the only important consideration. Specifications also play a key role, since you can't directly compare a 85 °C cap to a 105 °C one, or caps with different dimensions, voltage ratings, and capacities.

Besides electrolytic caps, we also find several polymer ones most likely sourced from Unicon.

A couple of voltage regulation modules handle the minor rails. An ANPEC APW7073 PWM controller is used on each of them, along with two FETs (Infineon BSC018NE2LS and BSC050NE2LS). The problem we see here is that both VRMs, along with the other components on the secondary side, aren't properly cooled by the 80 mm fan, which mostly occupies space on top of the primary side. Moreover, the PCB that holds the AC receptacle covers a significant part of the secondary side, blocking its airflow.

Small Suncon caps on the front of the modular PCB provide some extra ripple filtering. Unfortunately, that board is too small, so it only has room for a limited number of sockets. As a result, we don't get an optimal number of cables and connectors.

An STi STP3NK90ZFP FET is used to rectify the 5VSB rail, while the -12V rail is handled by another rectifier.

The soldering quality is quite good; that's typical of power supplies from Enhance.

The cooling fan, an Everflow R128015SM, uses double ball-bearings, and it operates quietly despite its small diameter. It is supported by a semi-passive mode, though that doesn't last for long.

Prev Page Packaging, Contents, Exterior, And Cabling Next Page Load Regulation, Hold-Up Time And Inrush Current
15 Comments Comment from the forums
Be In the Know