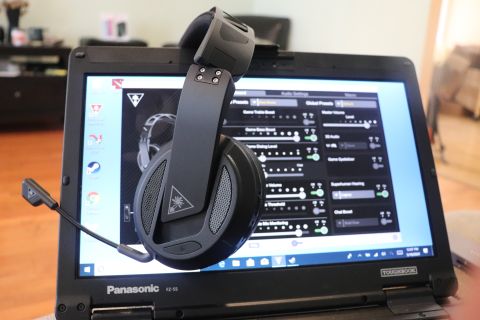 The Turtle Beach Elite Atlas Aero is a great gaming companion, thanks to a reliable feature for boosting the audibility of finer details in games. However, its feature-packed software is hard to install, and some won’t find it comfortable over long periods.

The Turtle Beach Elite Atlas Aero ($150 as of writing) seemingly checks a lot of boxes for those seeking the best gaming headset without a wire. While it features a USB Type-A wireless dongle option, gamers can also use a wired connection and use the cans with an Xbox One, PS4, PS4 Pro, Nintendo Switch, smartphone or tablet with the included 3.5mm cable.

With both wireless and wired connectivity options and a great microphone, the Elite Atlas Aero will be a worthy consideration for those seeking a versatile gaming headset.

The Turtle Beach Elite Atlas Aero has a straightforward look for a gaming headset with a sturdy frame and a metal bridge connecting the ears. It feels light in the hand but somewhat heavy when wearing it. At 1.80 pounds the Elite Atlas Aero is heavier than the wireless Cooler Master MH670 (0.76 pounds) and heavier than most headsets we’ve reviewed. The wired HyperX Cloud Orbit S previously held the record at 0.8 pounds.

The metal headband’s suspended padding is supposed to add comfort but can have the opposite effect during extended wear, especially if you have a larger head or hair. I have thick locs and found myself resting the bridge of the headset more forward on my head.Turtle Beach equipped the Elite Atlas Aero’s ear cups use gel-infused memory foam, leather and what the vendor calls an “athletic fabric.” But ultimately the cups are snug and made me feel like I was being pinched over time.

While there isn’t much room to slide and adjust the headset up and down, they swivel to lay flat on the chest when you take them off. This makes them easy to wear around when not in use. They also easily fold in for compact storage, but there’s no included bag.

The Elite Atlas Aero's left cup features an array of input options and controls, namely an on button, a button for the Superhuman Hearing mode, a 3.5mm audio jack, a mic jack, a MicroUSB port for charging with the included cable and a volume wheel for both the audio and microphone.

You’ll also find a mute button on the outer flat surface of the left cup, which users should keep in mind for troubleshooting software setup. The Superhuman Hearing mode and mute buttons are remappable, allowing users to change their basic functions.

It is easy to confuse the buttons and other controls  on the cans, due to their close proximity. Several times I turned the headphones off when I meant to activate Superhuman Hearing mode. It also took me a few attempts to sort out the audio and mic volume wheels. It was particularly cumbersome to try and adjust the headphones for comfort, at which point I’d sometimes accidentally turn off the headset.

At 50mm, the Turtle Beach Elite Atlas Aero’s drivers are of a typical size for gaming headsets, but you can get a stellar sound experience, especially if you’re willing to do some tweaking. The headset’s drivers use Turtle Beach’s Nanoclear technology, which is supposedly “tuned to deliver a vast soundstage as well as the clearest team chat via crisper sound with less distortion.”

Turtle Beach’s Superhuman Hearing mode, which you activate via software or the dedicated button, is a must for the best sound quality in games. The feature boosts audio detail and proved ideal for games because it made a lot of background details more prominent. Without Superhuman Hearing, I wished I could increase the volume more. Audio sounded muffled and low, even at 100%.

While playing DOTA 2 with Superhuman Hearing mode on, the background music was very loud and pronounced. Details, such as the moving wind, insects and animal noises, were easily detectable. I kept my volume level at about 50% for maximum comfort.

In the first-person shooter title Destiny 2, Superhuman Hearing mode again made the background music and other sound details easily distinguishable. With the feature on, I could hear the laughing of foes when my character died, as well as leaves flowing as I ran around the Tower. Keeping the headset at about 30-40% max volume was ideal for this game. But with the volume lower, I was able to pick even further details, such as my character’s footsteps. The voices of passing characters also seemed more prominent with the volume lower.

If you download the free Turtle Beach Control Studio software (more on that in Features and Software below), you can also turn on the headset’s 3D audio. The Waves NX 3D audio technology is supposed to allow you to pinpoint the location of incoming noises with immersive audio; however, I found it more suitable for videos and music than gaming.

I particularly favored 3D audio with the Bass Boost preset on while watching the movie Bumblebee. It felt like a softer version of Superhuman Hearing. With 3D Audio, I could even detect the sound the stars made when zooming into the Paramount logo before the movie started. During the film, explosions and crashes to the ground were prominent, as were the sounds of the autobots transforming.

The Elite Atlas Aero includes an omnidirectional, detachable microphone that’s very sensitive. While using it, I could hear my own breathing and mouth noises, and it even picked up the air blowing from my small table fan.

On the receiving end, my siblings found the volume and sound quality of the microphone impressive. They were able to pick up the difference as I adjusted the mic volume wheel on the headset. With the mic’s noise cancellation features, they had no issue hearing me above the various ambient noises or over music I played.

Turtle Beach claims about 30 hours of wireless battery life for the Elite Atlas Aero, but my review unit usually lasted between 15 and 24 hours before needing a charge. Battery life suffered more when I was using it for games rather than movies or music and with Superhuman Hearing or 3D audio enabled, at which point battery life leaned more toward 15 hours.

Thankfully, the headset has a decent battery drain safeguard in that they’ll shut off after being idle for 5 minutes.

You can track the headset’s battery life through the Turtle Beach Control Studio software, which features a battery life indicator in the bottom left corner. While it doesn’t include a battery percentage, it turns red when the headset is near the end of its power.

Those who can’t go without their cans may be happy to know you can charge the Turtle Beach Elite Atlas Aero while using them. The included micro USB to USB Type-A cable that comes with the headset is not long enough to do this comfortably, but it's easy enough to buy a longer one (if you don't already own one).

Once installed, the Turtle Beach Control Studio is elaborate and interesting. There are a host of game presets on the dashboard, including treble boost, bass boost and dialog boost.

The audio settings include a host of equalizers, while the macro settings lets you program various presets and controls to keys on your keyboard. You can also reprogram the headset’s Superhuman Hearing button and mic volume wheel to other functions. But you’ll want to keep the option to activate Superhuman Hearing handy.

The Control Studio is compatible with both Windows and Mac; however users can’t download the audio drivers on the latter, which greatly diminishes its usability.

Installation and setup, even on a desktop, proved extremely challenging and is one of the biggest limitations of the Turtle Beach Elite Atlas Aero. The software is easily accessible through the Turtle Beach download page. But once I followed the installation steps, I found myself in a loop of downloading the Control Studio, downloading the drivers, restarting the Control Studio after being prompted and restarting the computer after a second command.

This appears to be a glitch in the Turtle Beach Control Studio that has also affected other models of Turtle Beach headsets. I ultimately resolved the issue and was able to successfully install the software with a tip I found in the comments section of an official setup tutorial on YouTube. It required me to turn the headset off, hold the mute button until the power light started blinking, connecting the headset to my PC, insert the dongle, unplug the headset, turn the headset back on and then plug it back in. I also had to repeat this process several times. Not exactly seamless.

Note that the software won’t work if the Elite Atlas Aero is off or if you’re using the 3.5mm headphone cable.

Sadly, the headset is held back by hard-to-install software and a tight fit that gets uncomfortable during long periods of use.

If you’re looking for a cord-free alternative, in our Sennheiser GSP 370 review, we praised its comfort, bass and impressive battery life. But the Sennheiser is pricey, usually selling for about $200. Meanwhile, the Cooler Master MH670 is a lightweight, but quieter, wireless that often sells for less money ($120) than our review subject.

Still at $150, the Elite Atlas Aero offers a wireless or 3.5mm connection and enough oomph to heighten your gaming experience with additional auricular details.