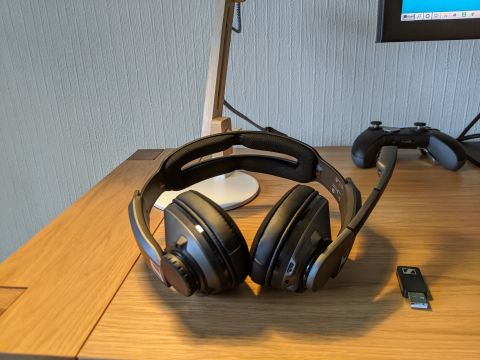 The GSP 670 is considerably cheaper than Sennheiser's flagship model but bears a similar sturdy design, and its amazingly long battery life is hard to top. However, we'd prefer a better mic, and you won't get the same sound quality as you would with a wired headset.

When buying a wireless headset, good audio quality is, of course, a necessity, but also important is battery life. The point of going wire-free is simplicity, but if you're constantly having to charge that wireless device, simplicity goes out the window. Longer battery life means more time to game, and if that's a main priority for you, one of the best gaming headsets is Sennheiser’s GSP 370 ($200 at the time of writing, PC, Mac and PlayStation 4).

The headset is the lower-end version of the wireless Sennheiser GSP 670 (about $300) , but the GSP 370 still delivers brilliant audio and build quality. And that's while extending claimed battery life up to 20 hours (via Bluetooth) over the flagship. If you want a simplified gaming experience without sacrificing much audio quality, the GSP 370 does it just as well as pricier headsets by making searches for the charging cable much less frequent.

The GSP 370's design clearly belongs to the GSP family, but it's not chunky as the pricier GSP 670. The chassis itself is much closer to that of the original GSP 300  (that came out in 2016) in shape but features premium construction materials throughout and an understated gunmetal finish across the earcups and headband.

The headband's hollow design helped keep the overall weight down and distributed evenly over the two memory foam pads sitting on my head. And those pads are covered in a breathable fabric that still felt great after hours of usage. This design’s immediately comfortable and required very little adjustments.

Contact points around the earcups have memory foam around them too, and although they’re not anything like as thick as those on the Razer Kraken Ultimate, for example, they were just as comfortable. A combination of soft artificial leather and even softer suede encases the pads without the slightest stitching defect on our review sample.

If you're into a flashier, bolder gaming aesthetic, you'll find the GSP 370 rather conservative. You could just as readily imagine someone in an air traffic control tower wearing these as you can a pro gamer.

As typical of Sennheiser, it kept the branding minimal here. There's a simple brand logo on the joint at each side of the headband and a very small "Sennheiser" and model name higher up the band. For anyone turned off by the look of traditional gaming headsets, this is a massive plus. Features aside, the only obvious visual nod to this being for gaming are the ripples in the back of the earcups, which probably wouldn’t make it onto audiophile-style or office headsets.

In addition to the memory foam headband and earpads, there are more subtle details, like the soft foam around the ball joint connecting the headband to the earcup. The result is completely silent movements and adjustments. And while it’s hard to wax lyrical about plastic, the design team’s clearly sweated the details by pairing a thin band of high-gloss plastic closest to the contact pads. Elsewhere on the peripheral you get a matte finish elsewhere.

Special mention must go to the amply sized volume control. Simply put, it feels expensive. There’s a great amount of resistance, and it’s notched to give you a good idea of just how much you’re increasing or decreasing volume. Otherwise, the ear cups hold no other features besides a MicroUSB port for attaching the included MicroUSB to Type-A charging cable.

From the first listen to its wide and warm response, it was clear that this headset's wireless nature doesn't dampen its audio quality -- at least not by a lot. Although the  GSP 370 houses one of the richest and most powerful tones I've heard from a gaming headset in recent times, if I really listened for it I could hear a very slight reduction in overall sound resolution compared to a great set of wired cans.

The GSP 370 is similar to the wired Kraken Ultimate in that it crumbles the tiny bones of your inner ear to a fine powder with its bass response but keeps things tight enough to articulate higher frequencies in great detail too. Also like the Kraken Ultimate, it’s great at keeping things like speech or higher musical notes distinct when lower frequencies are booming away.

That combination of exaggerated, sonorous voicing lower down the EQ with clear and whispery highs made most games sound just as I'd want them to using the default flat software EQ setting. Gunfights in PUBG were ven more frightening than usual. When I fell off my horse in Red Dead Redemption 2 while wearing the GSP 370 and I could almost hear the bruises forming, such is the forceful sound reproduction.

Some prefer a flatter response for competitive games so they don't miss cues like reload sounds, footsteps or those infuriating fake bomb defusals in CS:GO. They won't find that flat response here with any amount of software tweaking, but it's doubtful their performance - nor the number of cues they actually hear - will take a drop as a result.

Musically, that slightly scooped characteristic suits rock, metal and EDM brilliantly. If your music collection's 95% whispery singer-songwriters, you won't get the absolute most out of the headset , but you'll still hear the details well enough to be moved by the music. But somewhere between the source, your ears and the air carrying the wireless signal, a touch of artifice would creep into the bass. It was similar to that reverberant sound you get from digital surround, but not as noticeable.

Should you wish to inflict digital surround on yourself, you can do so via Sennheiser’s software suite (more on that in Features and Software below). That suite includes a dial for virtual 7.1 surround sound. This does exactly what it sounds like - dials up or down the width of the digital sound stage and the echo that comes with it. It's not the very useful in most scenarios, but it’s there.

Overall, this is a great-sounded headset, even by wired headset standards. And there’s very little between difference in audio quality between these and the GSP 670, which currently costs about $100 more, unless you really listen out for that wireless artifacting.

That 100-hour claimed battery life takes top billing on the feature list, and while you’d have to give us several years to test out how well this figure holds up over time, our review unit lasted about 70 hours with heavy gaming usage at typical and varying volumes.

When the headset hit 20% battery, the Sennheiser software politely informed me that it might be a nice time to locate that USB charge cable that came in the box.

Prior to testing this, the swappable batteries in the SteelSeries Arctis Pro Wireless were probably the best charging solution on the market. But with around 20 hours of charge time, which has slightly degraded on my unit after about a year of use, we really have to consider this wonder-battery in the GSP 370 as a strong rival. Yes, you still have to admit defeat every once in a while and hook it up to a USB Type-A port, but probably only once a week.

Sennheiser says the GSP 370 is compatible with Windows and Mac PCs and PlayStation 4, but note that its software only works with Windows 10.

Once I delved into the Sennheiser Gaming Suite though, things took a turn for the worse. It’s usable enough, but what it reveals is telling. Firstly, noise cancellation and side tone are grayed out. It's possible this could be added with an update, but currently your options with the mic are, perhaps, more limited than expected.

That wouldn’t be a massive deal, but the mic isn’t the best in the first place. It sounds very thin and compressed compared to - well, nearly every other mic we’ve tested recently. However, there’s no crackle or noticeable noise floor.

One option that isn’t grayed out in the mic section is the voice enhancer. Using the Warm or Clear presets, you can alter the sound slightly. I found the Warm one to be the most useful, but it doesn’t magically transform this into a Blue Yeti mic.

Elsewhere in the software are EQ presets, a stereo/7.1 toggle and a sound test. The latter didn’t produce any sound for us, so again perhaps there’s some work to be done in future updates. But the EQ presets cover the usual bases -- flat, movie, music and a low-cut eSports setting -- and are generally useful.

This isn’t a perfect headset - when are they ever? - but in the most important categories it puts in a heck of a performance.

The diminished size compared to the higher-end Sennheiser GSP 670 makes it more comfortable, and although going wireless compromises the sound just a hair if you’re an obsessive, it’s still right up there with the best bass-heavy offerings on the market. Those who prefer a flatter response should still look in the direction of the SteelSeries Arctis Pro Wireless.

But for typical ears, these cans will sound comparable to a wired headset and have you reaching for the charging cable much less often than with other wireless rivals.