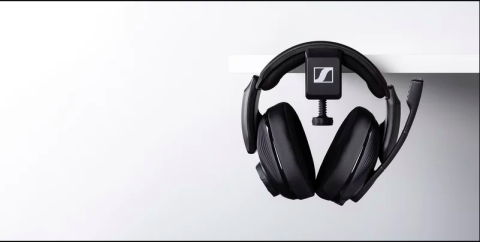 The Sennheiser GSP 670 is a truly luxurious and comprehensive wireless gaming headset that really sings, whether for music, film, or gaming.

With the Sennheiser GSP 670, the company's first wireless gaming headset, Sennheiser lands on a real special blend of finesse and function.

Priced at $350/£299 at the time of writing, the GSP 670 shares some mechanical similarities with Sennheiser’s GSP 600 wired headset and the same speaker technology in each earcup. However, this cable-free model features a 16-hour battery life (or up to 20 when connected via Bluetooth) and very low latency. That Bluetooth compatibility means the GSP 670 can be used with just about any device you can throw at it, from PCs, to consoles, smartphones and tablets. Although not the best gaming headset around, a generous roster of controls and fundamentally impressive sound quality, combined with a great feel and weight make an argument for its premium price.

Visually, the GSP 670 continues the GSP family’s aesthetic, which one might unkindly describe as Terminator earmuffs. The headset's overall look is probably the aspect with which I'm least enamored. But Sennheiser was right to keep the headset's scheme muted by using black and gray and avoiding RGB lighting or accent colors. With this many angles and surfaces, you don't need any additional details.

You can customize the look of these cans by buying branded cover plates from Sennheiser's online store for $10, with Dota 2 and SK Gaming (German eSports company) variants currently available. I'm all for this growing headset market trend for customization (SteelSeries' swappable headbands and plates for its Arctis-series headsets have really kicked things off).

Fortunately for your head, the GSP 670's physical looks are the result of careful choices made in the name of comfort. At 398g, it's on the heavy side for a gaming headset, but discomfort simply isn't an issue with these cans. This is thanks to the mechanical outline of the headband and metal single-sided yoke, combined with an adjustable caliper pressure system at the top of the headband. By adjusting two sliders at each side of the headband, you can control precisely how much pressure the earcups exert on your delicate cranium, which is fantastically handy for anyone with an especially large or small head.

Sennheiser didn't skimp on construction materials here either. The memory foam and leatherette contact point covers are top-of-the-line, conveying value from the second we pulled the headset out of its box. The headband's generous padding at the top of the head did its job, keeping me comfortable, for hours. This kind of super-soft padding tends to hold its shape and resistance quite well over time too, so we expect a pretty uniform comfort experience for the first few months of wear. With the right adjustments, the earcups never dug in but felt firmly attached enough that I could move my head around comfortably without the headset shifting position.

A perennial favorite feature of mine about Sennheiser’s gaming headsets is the boom arm design. In short, it has a mic mute built in so that you're automatically muted when pushing the arm up and back to broadcasting when it's down. The satisfying click felt when doing this really tells of the construction quality. I defy you not to move it up and down aimlessly, just enjoying the sensation, when you first use the headset.

A newer feature on the Senny cans is the inclusion of separate chat and game mix controls on the left earcup. I actively miss the chat mix thumb wheel of Arctis-brand headsets when we use rivals, so it's great to see similar control schemes adopted elsewhere. If the game volume swells especially loud, during cut scenes for example, you can make a quick adjustment without having to delve into any options menus or alt-tab out. Likewise, if you're getting sick of your Discord buddies hollering nonsense into your earholes while you're the only one left alive in your co-op game of choice, one twist of the chat volume sends them to oblivion. Handy.

Not much is different in the audio department of the wireless GSP 670 compared to the wired GSP 600. The same neodymium magnet drivers articulate the sound, and the response is noticeably powerful at the bass end (more so than previous Sennheiser models, like the Game One, which articulated the details beautifully in both open-backed and closed-backed variants).

There's always a slight trade-off when the EQ curve is styled to sound good rather than to sound totally flat as with studio monitors. Usually, it comes in the tiny details in the upper midrange and the treble. However, the overall sound is better for its intended purpose when it's sculpted in this way.

You couldn't master an album using them, but for gaming, movies, TV and music, these cans sounded wonderful. There's a liveliness to them, which I suspect comes down to the luxuriousness of the contact points as much as the drivers. I could feel the music swelling and pulsing in pressure changes, as well as hear it. It's a sensation I've always loved in Bose's closed-back headphones and am always thrilled to find in the gaming market. Perhaps some gamers will find it a bit too busy at the bass end, but the GSP 670 really speaks to my personal preference.

This headset is virtual 7.1 surround sound compatible by using the Sennheiser Gaming Suite software's Binaural Rendering Engine. If you want to get serious and listen out for positional audio cues in the likes of CS:GO, Sennheiser's proprietary surround algorithm has your back and, indeed, your front and sides. You can make out a cold, 'digital' quality to the DTS: HeaphoneX algorithm, as it articulates a wide surround space. The same's true here, but it's definitely easier to pinpoint sound effects when it's enabled. A useful tool, rather than an additive note to the audiophile experience, then. As an added bonus, it can be turned on and off using a programmable button on the left earcup. You do need to delve into the software to set that up, though.

Sennheiser's software suite is a pleasant, no-nonsense affair, allowing quick and painless customization of EQ curves, mic noise-cancelling levels, the aforementioned surround sound and battery life monitoring. Personally, I very rarely use custom EQ software profiles and found the mic noise cancellation levels to be just right out-of-the-box. But the options are there if you want them. Our only minor irritation is that the software's required to program the button on the left side to perform various functions. The program didn't virtual switch surround sound on and off until I installed the program.

The reported battery life of 16 hours via the wireless dongle sounds like a fair estimation based on our testing; although, we haven't had our sample unit long enough to test how quickly that number degrades over time when it's had a few charges.

Bluetooth pairing to smartphones was easy. The 20-hour battery life via that connection held true at least for the first charge.

The truth is, in 2019, there's very little between the best-sounding gaming headsets. The SteelSeries Arctis Pro Wireless ($290 at the time of writing) and HyperX Cloud Alpha ($100) both sound stellar, and the same's true of the wired Sennheiser GSP 600 ($249) and our review subject. These minute differences in audio characteristics make it very difficult to recommend one headset above all other purely on the basis of its sound quality. It really is all about the benefits of the whole package now.

This is the most complete and best-sounding gaming headset package Sennheiser has put together to date. It's also very expensive. The sound is fantastic, but the same is true of the cheaper, wired GSP 600 - and indeed much cheaper rivals from SteelSeries and HyperX.

The high price precludes it being a no-brainer pick. But those willing to pay extra for increased durability, replaceable parts and a real feeling of luxury will be richly rewarded for their outlay.