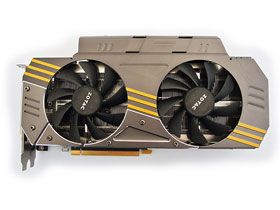 When it comes to overclocking, as always, we start by reminding you that the luck of the draw is a key consideration. Despite the variables beyond our control, we're still interested in seeing how far we can push Zotac's AMP! Omega card.

Unfortunately, our experience with the new Firestorm utility didn't go as smoothly as we would have liked. At first, we had no success getting it to work. We were told to upgrade to version 10.44.003 and still had no luck. Finally, a Zotac representative told us that we needed to launch the application as an administrator. Success! We were also told that the company is aware of the problem and working on a solution.

Moving on. This is Zotac's new FireStorm interface. You might recall that the previous version appeared similar to MSI's Afterburner utility, so the company went for a more stylistic look this time.

While the temperature and clock rate indicators do their jobs, the user interface is an exercise in miscommunication. We're expected to somehow deduce that the 2D, 3D, and 3D+ fields below the Quick Boost button indicate three different levels of acceleration. Why not give them more explanatory labels, such as Quick Boost level one, two and three? And the Advance button should be labeled "Manual Settings", while the "Gamer" button should be called "OC+ Settings". Clear, simple labeling is both easy to implement and crucial to a piece of software's success. There is no excuse for buttons that have confusing labels. Sorry folks; I'll get off my interface critique soap box now. Lets get back to the review.

Click the "Advance" button and you are presented the following window, with basic overclocking settings:

Unlike the front-end's buttons, these settings are easy enough to understand. The only strange inclusion is GPU overvoltage, which is disabled. It can only be adjusted from the OC+ window, accessed via the "Gamer" button.

Note the settings we used for our maximum overclock. The card's BIOS limits its power target to a maximum of 111%. That's a surprising limitation for what appears to be over-engineered hardware, especially considering that the reference GeForce GTX 980 has a 125% power target limit. This limitation severely curtails the card's overclocking ceiling. Granted, the AMP! Omega's TDP is slightly higher than the reference card by about 5W, according to our testing, hitting about 170W. An 11-percent bump takes it to the 190W range. Compare that to the reference card's 165W TDP, which stretches to 205W at 125%. In other words, a reference GeForce GTX 980 has more overclocking flexibility than Zotac's AMP! Omega. The hardware may be willing, but the BIOS limitations are weak.

In order to adjust GPU voltage, we need to access the OC+ settings by clicking "Gamer", which provides another pop-up window titled with the unexplained acronym "S.S.P". So, Gamer is equal to OC+ is equal to S.S.P.? Ugh.

This window is only accessible if your graphics card has OC+ functionality and the USB cable is attached. There's some unique information, but the important stuff for overclockers is the GPU Vcore and memory voltage controls. The Vcore allows adjustment from 0.5 to 1.26V, while the memory voltage allows only a single-step 20mV bump. Unfortunately, we experienced occasional lock-ups when we modified the GPU voltage.

Not that the imposed ceiling mattered. We actually had to lower GPU voltage from the stock 0.88V to 0.86V because the power limit hamstrung us more than the GPU's voltage scale.

Our maximum stable overclock topped out at a 1373MHz base clock rate with a typical 1474MHz GPU Boost frequency, plus 1837MHz (7348MT/s) GDDR5 memory. While we could dial in more aggressive settings, the power limit eventually shut us down under load. To be fair, that's a respectable overclock. But we really think that this hardware has a lot more to give. If it only matched the reference card's 125% power limit, I think that Zotac's AMP! Omega edition would have shown us a much better result.

At the end of the day, we achieved a solid 15% performance increase in 3DMark Fire Strike compared to the reference GeForce GTX 980, and that's nothing to be ashamed of. Even the Firestorm utility's one-click overclocking capability impresses; the Quick Boost 3D+ setting yielded a 1273MHz  base and 1374MHz GPU Boost setting with 1779MHz memory, granting a 9% performance improvement over reference.

Prev Page Temperature, Noise And Power Benchmarks Next Page A Big Gun Limited By A Small Magazine
27 Comments Comment from the forums
Be In the Know