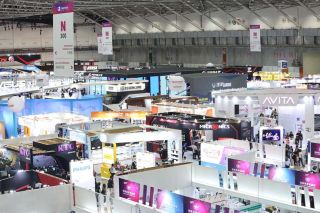 As the list of event cancelations due to the coronavirus grows, we're becoming ever-more curious about the fate of Computex. Thus far, the show has not been canceled or postponed, nor has there been news of 'safety protocol' to ensure that the show can go on. Now, Taiwan-based hardware manufacturers are requesting that the show gets postponed, as reported by DigiTimes.

Over the last 3 months, the Coronavirus situation has become increasingly severe around the world. However, Taiwan has kept the situation largely under control. The country has closed off its borders to foreign nationals, and locals returning home are ordered to stay in a 14-day quarantine period upon returning to the country. Along with other measures, this has lead to Taiwan keeping its case count below 200 individuals to date.

The request for postponing the show does not come as a surprise. Computex takes a lot of prep work from the manufacturers and is not cheap.

If the situation doesn't get worse and Taiwan keeps the situation under control, Computex could potentially be held for the locals in Taiwan with the right precautions, but that would defeat the purpose of the show as an international event. DigiTimes's sources also say that there are a number of Taiwanese companies who would prefer not to participate in the event.

With Computex launching on the 2nd of June, there are just 71 days to go until the show kicks off. Typically around this time, much of the industry is busy making their plans for heading to Computex, and as such we understand the demand for certainty.