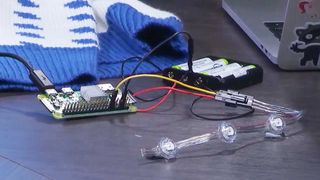 Microsoft's Senior Cloud Advocate, Jim Bennet, took the ugly sweater trend to a new level this week by creating an IoT ugly sweater using a Raspberry Pi, specifically a Raspberry Pi Zero W. It features LED strands by Adafruit that can be controlled via Twitter.

Jim not only created the sweater but also provided plenty of resources to recreate the project yourself. His project uses the Microsoft IoT app platform Azure IoT Central, the LEDs are programmable NeoPixel LED Dots Strand lights from Adafruit and the whole operation is controlled with a Raspberry Pi Zero W.

The LED strand is carefully sewn into place on the sweater and connected to the Raspberry Pi Zero. You will need a battery pack of some variety to keep your sweater working wire-free. Jim created a list of commands within Azure IoT Central which check Twitter for commands that relay to the Pi. For example, a tweet with the text "#IoTuglysweater Jim none" would turn the LEDs on Jim's sweater off.