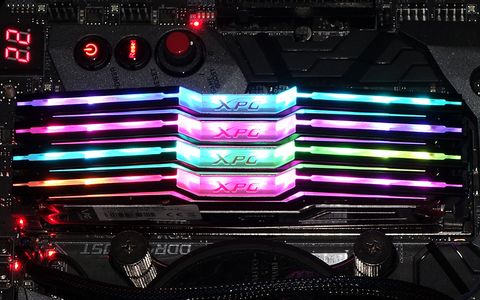 Adata charges less for RGB than some of its competitors, and offers its own RGB control program. Those in the market for RGB lighted DDR4-3000 might just find that combination a perfect formula for value.

RGB lighted memory has been around for a while, yet most of those modules have required either external control or solutions like Asus’ proprietary software to change lighting modes. Adata has its own control software, but this RAM set also works with the software of most major motherboard brands.

The default Rainbow mode shown above is unsynchronized, which is, well, great for displaying multiple colors in a single photo. All the software options add color synchronization.

Adata has built the XPG memory brand up to the point that it even has its own website. The package still carries the Adata label on back, while up front is a magnetically latched lid designed to show off a few features. That's some serious engineering for a box.

Inside the box are four 8GB DDR4-3000 modules, which qualify this as a 32GB quad-channel kit. But users who want to fill the four slots of a dual-channel board will find that it works fine, too. (The platform determines the number of memory channels, and the memory just fills those channels.)

Our motherboard picked DDR4-2666 CAS 19 by default, and enabling XMP allowed it to configure the programmed DDR4-3000 settings.

After we cleaned up a messed-up uninstall of MSI’s RGB software, the Adata beta software worked flawlessly. The easiest way to clean up the previous uninstall was to reinstall that software and uninstall it again. In the midst of that process, we took the following screenshot of MSI's Mystic Light working flawlessly with the XPG Spectrix D40 memory, which was a pleasant finding given our spotty history with Mystic Light.

The current standard for DDR4 ICs is 8Gb (8 gigabit) capacity, which means an 8GB module will have eight ICs; as each IC has an 8-bit pathway, all eight make up a single 64-bit “rank.” That said, DDR4 can also support a second rank on the opposite side, which facilitates the production of 16GB modules. In theory, a dual-channel motherboard should find identical performance between two 16GB dual-rank and four 8GB single-rank modules, since both configurations have four total ranks. So, to test this theory, we’ve included a competitor’s 32GB DDR4-3000 two-DIMM kit in today’s charts.

An earlier standard for DDR4 ICs was 4Gb capacity, and 8GB modules containing those ICs are organized as two 4GB ranks. Curious to see if there was any performance benefit for eight total ranks, we grabbed four of Super Talent’s old F3000UB8G modules and stuck them in the charts. (These aren’t available as a four-DIMM kit, so we’re not including the product link.)

We’ve expanded outward from our Corsair DDR4-4600 review by switching to a board that supports four DIMMs. MSI’s Z370 Godlike Gaming doesn’t have any memory-overclocking advantages of the smaller board used in that review, but it has similar performance scaling and can push several of our kits past DDR4-4000. We’re also retaining the hardware from that review, including its GTX 1080 and Toshiba/OCZ NVMe SSD.