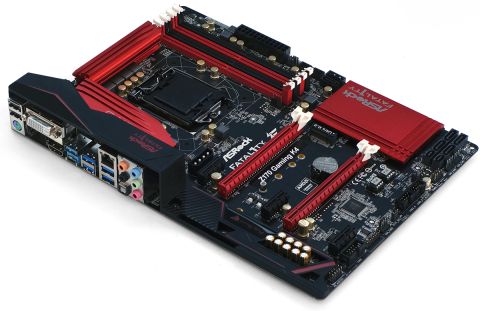 The Fatal1ty Z170 Gaming K4 configured G.Skill's XMP-3600 memory appropriately, but wasn't stable above DDR4-2626 with all four modules installed. The same 1.35V pushed DDR4-3501 with only two modules installed, which leads to questions about the ampacity of its DRAM voltage regulator. Then again, four-DIMM frequency limits can also be firmware related.

Should a builder choose to go with two DIMMs for enhanced data rates, they'll also find a wide enough range of timing adjustments to push the performance envelope. I could have spent weeks in here, but feedback has suggested that you'd rather see the article this month.

The Fatal1ty Z170 Gaming K4 includes "Load-Line Calibration" to boost CPU voltage as it drops under load. The amount of compensation required to keep a steady voltage depends on the current requirements of the CPU, which in turn varies with the number of active cores, core temperature, and clock. At 1.30V set core voltage and 4.60 GHz, and under eight-threads of Prime95, we found that "Level 1" allowed the CPU voltage to sag by less than 10mV.

Unlike the relatively-accurate core-voltage setting, the Fatal1ty Z170 Gaming K4 produced slightly more than 1.35V with a mere 1.325V setting. Everyone cheats a little on DRAM voltage on their enthusiast boards, and some of the fastest-rated memory appears to require that "little extra stability."

ASRock's F-Stream utility provides most of the overclocking controls from DRAM, a better-featured hardware monitor page, fan slope control and a tech service request utility. "Optimized OC" settings mirror those from firmware, and "Advanced Turbo" modes feature similar 4.60 and 4.70 GHz settings but at 1.31 and 1.36 volts CPU core, respectively. The "Auto Tuning" algorithm proved less effective, dropping the frequency to 4.30 GHz after raising the core voltage to 1.50V. That core voltage is too high for my comfort, and the board's lower achievable frequency could be due to the high voltage initiating the motherboard's over-current protection.

Driver and firmware updates are available through ASRock Live Update, which also offers links to several freeware and ASRock-specific applications. Most of these are described in great detail on the Fatal1ty Z170 Gaming K4 webpage, including the three-month premium membership upgrade to XSplit streaming services.

Prev Page Introduction, Specifications And Features Next Page Test Results, Overclocking And Conclusion
8 Comments Comment from the forums
Be In the Know