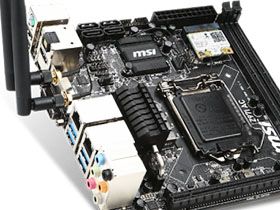 Two factory-programmed overclocking types include “Advanced Turbo” and “Optimized CPU OC Setting”. Advanced Turbo is designed to provide a 20% or 30% performance boost. It pushed our CPU to 4.5 and 4.6GHz respectively. The motherboard voltage regulator unfortunately couldn’t keep up with the 1.27 and 1.36V CPU core settings, forcing the motherboard into a CPU-throttling overcurrent protection mode almost the instant a heavy software load was applied.

“Optmized CPU OC” settings are derived directly from those in firmware, again triggering the Z97M-ITX/ac’s overcurrent protection. Even the “Auto tuning” option, which is supposed to find the maximum stable setting, used a core voltage (1.2V) that resulted in power regulator thermal protection after several minutes. A heat sink on its transistors might have solved that issue.

ASRock’s “OC Tweaker” firmware menu starts with a group of basic overclocking settings that are supposed to make it easy for novices to get started. They also work great as a starting point for a maximum overclock stability test, since enabling one of these profiles also locks the CPU multiplier and adjusts any related power settings. That is, assuming you have an overclockable K-series processor to begin with.

“Optimized CPU OC Setting” options include 4.5GHz at 1.23V core, 4.6GHz at 1.28V and 4.7GHz at 1.4V. I have to wonder if these settings were developed on a different motherboard or CPU, though, since overcurrent protection for the Z79M-ITX/ac’s tiny voltage regulator tripped at nearly any level of CPU load. Overcurrent protection induces clock throttling, and you can’t honestly brag about 4.6GHz when the excess current load forces the motherboard to drop down to a frequency below that of the CPU’s stock clock.

Our typical 1.28V overclock setting would have pushed the CPU to its thermal limit at 4.6GHz, but the Z97M-ITX/ac wasn’t so cooperative. Even the Core i7-4790K’s default voltage is too high for this motherboard to maintain a fixed-ratio 4.4GHz frequency with all four cores loaded, though the default Turbo Boost ratio for four-core loads is only 42x.

Instead, we were forced to undervolt in order to overclock at a fixed frequency and full load. That lower voltage limited the CPU's stability to 4.3 GHz. Still, 43x is greater than 42x. So apart from those expecting to use “Enhanced” Turbo Boost ratios, where the maximum multiplier is applied regardless of the number of cores loaded, we’d call this a win.

The Z97M-ITX/ac welcomes memory tweakers with a full selection of primary, secondary and tertiary timings.