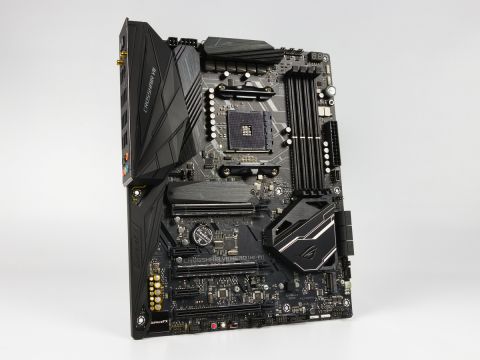 As important as the product spec sheet and all the features that are bundled into a product are, it's safe to say that power, efficiency, and overclocking show how well a brand can compete in various product classes. All three flagship boards perform similarly at idle, full CPU, and full GPU load with deltas ranging between 10 and 11 watts for each category. Only when factoring in Full System load (100% CPU and 100% GPU) can we start to see some operating system, firmware, and power control software beginning to step in to regulate things.

The Asus X470 Crosshair remains competitive here, performing with a less than one percent gap from the average. We don’t present the additional chart, but if we removed the full system load values, we would see the Crosshair VII take top prize in efficiency, which might be better considering its CPU-focused overclocking lineage.

As a precursor to our overclocking segment, let’s set the stage for the capabilities of this motherboard. The voltage regulator (also known as VRM) designs of Asus boards are well known as being robust. For our testing today, running at Prime95 for thirty minutes at stock conditions, the Asus’ processor Tdie temperature ramps up to the highest reported value from these boards (when looking at HWiNFO64 sensor data). That might sound bad, but it really is not an issue for Ryzen 2 or any processor going into this board. However, looking at the VERM temperatures (as reported by HWiNFO64) we see the second-best temperatures as a result of what appears to be a modest heatsink design.

Now let’s bump it up to 11. For now, we’ll only compare the MSI X470 M7 AC and the Asus X470 Crosshair VII Hero’s maximum short-term overclock (ie, the highest data we’ve collected). Our VRM MOSFET (in black) shows that both boards are reporting within a few degrees of each other at this maximum condition. The blue line shows that the reported Tdie from HWiNFO are hitting our “safe” threshold of around 85C. There are still the important factors of voltage and frequency, which prohibits us from comparing these temperatures directly. But we do have an observation on the reported current. On the Asus board, we see a very small variance in the output current, roughly 2-5 Amps max. On the MSI board, meanwhile, we see swings of up to 10 Amps of current! If all things are created equal, the Asus board could have a much more stable power delivery, which helps enhance confidence on what UEFI settings translate into actual physical conditions. In conjunction with the probe points, the ability to observe these variables becomes invaluable for the X470 Crosshair VII Hero.

After carefully looking at our voltage regulator performance, it is clear that the Asus X470 Crosshair VII Hero board is capable of impressive overclocks. Without adjusting the voltage, we easily ran Prime95 to an impressive 4.2GHz for short durations, but cross the line of both our voltage and temperature safe conditions. Manually dialing in a maximum safe voltage of 1.3875, the system eventually crashes at the aggressive frequency target. Dialing back to 4175MHz ensures both safe voltages and temperatures for our full eight-hour test run.

Another impressive feat: our Corsair Dominator Platinum DDR4-3466 RAM hits a respectable 3333MHz when all slots are populated. With a little bit of tuning and reducing the amount of DIMMs installed, we expect to run the XMP settings with minimal adjustment to the system settings.