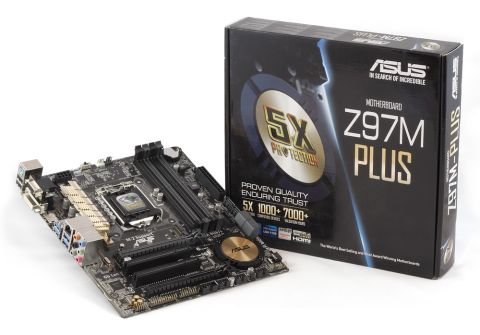 A perfectly usable board if you can find it on sale, but better options are available above $120.

The Z97M-Plus is the least expensive Z97 mATX board Asus offers, which might make you think it's low-end. However you'd be wrong, considering the other two are the $170 Gryphon and the $220 Maximus VII Gene. At $135, the Z97M-Plus is toward the top of the mainstream price range. With a near identical price to the previous ASRock Z97M OC Formula, there will of course be many comparisons between the two. Let's see how the Plus stacks up against the competition.

With no flashy colors, the Z97M Plus looks somewhat pedestrian compared to the last few boards that have come through here. The two gold accents on the VRM and chipset heat sinks are the only color on the grey/black board. I gave some meaningless style points to the OCF last time for its sharp colors. I give the same empty points to the Plus by not treating me like a squirrel and thinking stylish anodizing will sway my head. What can I say? I prefer windowless cases, and flamboyant colors don't mean anything behind a steel panel. A board only needs a good feature set at a good price to earn my respect.

The board topology is perfectly straightforward, though Asus does throw in a few extras we haven't seen on the previous ASRock models. The 8-pin EPS power jack is up on top as usual with two 4-pin fan headers. Joining them is a three-position GPU Boost switch that can overclock the CPU and GPU; CPU, GPU, and BCLK; or be left off. With this board and CPU, position one set a tiered CPU multiplier of 46, 45 and 44 based on core usage. Position two set a hard CPU multiplier of 36 and 125 MHz BCLK for a 4.5 GHz overclock. Both positions left VCore on automatic, which peaked at 1.328V and 1.298V, respectively. Neither had any effect on the GPU. However, with the current generation of dynamic GPU clock and fan management technologies (and my test bed has an R9 290X), I'm left to wonder how applicable the GPU portion of this feature is.

The other extra is the MemOK button at the top right. Pressing and holding the button triggers the board to do a series of self-tests on the RAM to find compatible settings. It's a nifty feature for recovering from too-high overclocks and when you want a general idea of your RAM's lower limits. The RAM slots also feature a fixed latch on the bottom side next to the PCIe slots. This should be a requirement on any mATX board as it makes it much easier to remove RAM modules when a GPU is in the top slot (the backplate on the 290X I use touches the RAM latches on most mATX boards). The RAM slots are just a little closer to the CPU socket than on the ASRock boards. I could still use the first slot with my test RAM, but it was touching the CPU cooler fan.

Down the front edge is the 24-pin ATX power plug, six SATA ports and the USB 3.0 header just behind the SATA jacks. The first and second SATA ports are not forward-facing even though ports three through six are. I'm not sure why Asus would do this, especially since port one and two are the most likely to be used. A socketed BIOS chip is in the bottom right corner.

The expansion card area has a second 4-pin fan header and M.2 socket above the first PCIe slot. This is our preferred location as it keeps the SSD away from GPU waste heat. The Plus supports 60mm and 80mm drives and both SATA and PCIe modes. The M.2 slot shares lanes with the bottom PCIe slot and SATA ports five and six, depending on operation mode. Speaking of PCIe, the Plus has two 16x length slots. The top is grey to distinguish it as the 3.0 x16, while the bottom is only 2.0 x4. Two legacy PCI slots are between. The bottom edge of the board has the usual mix of headers. From left to right: HD audio, parallel, TPM, SP/PDIF (requires additional break-out card), serial, three USB 2.0, clear CMOS and front panel.

The back I/O panel is a little sparse compared to the OCF. You still get a PS/2 port for a keyboard, but only two USB 2.0 ports for peripherals. Video is the same with VGA, DVI-D and HDMI. The Plus has four USB 3.0 ports for high-speed storage, but no eSATA. Networking is handled by an Intel I218-V gigabit controller. Instead of a TOSLINK, you get an additional 3.5mm jack for a total of six, though this really isn't a loss. The Plus uses an ALC887 chip for audio, meaning real-time 5.1 encoding with Dolby Digital Live and DTS-Connect aren't supported. That means no 5.1 game audio. The only 5.1 audio you can get over this board are pre-encoded streams, like movies. And while some older HTPCs might still use fiber optic audio cables, I have to think anyone building a new one today will be using HDMI for audio.

Package contents are nearly the same as we've seen in the other mATX boards. You get an installation CD, two SATA cables, a backplate shield and instruction manual. The SATA cables are on the shroter side at 16 inches (40.5 cm). My same complaint applies here as the past boards: a Z board should include four SATA cables. Like the OCF, it's halfway excusable since an M.2 slot doesn't need any cables.