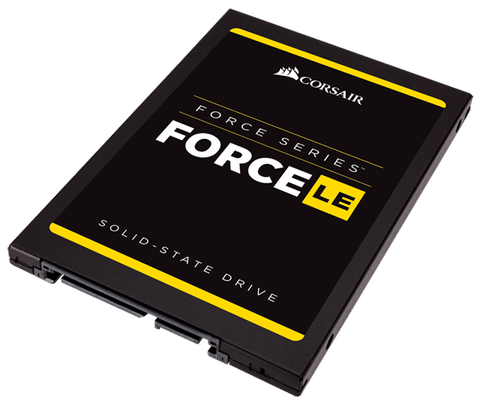 The Corsair Force LE, while not the new overall value champion, comes very close to the Samsung 850 EVO. If you demand more value and can live with a slight performance loss, the Force LE is the entry-level SSD for you.

Toshiba's 15nm TLC flash had an immediate impact on the SSD market. The company started pumping it out in high volume to compete in the low-cost storage space and now it's offering superior performance to the 16nm TLC from Micron and SK hynix. This is Toshiba's current answer to Samsung's triple-level-cell memory, which is faster but also more expensive.

Fabless SSD manufacturers seem to like matching Toshiba's 15nm TLC up to the Phison PS3110-S10 controller. It's a combination we continue to see in our lab, likely due to its entry-level performance at an aggressive price. The Corsair Force LE 960GB we're testing today costs $250, but we've already seen it discounted even further.

Phison's PS3110-S10 processor recently received two key firmware updates. One of them increased sequential write performance beyond the initial burst stage (from the emulated SLC buffer). This doubled our benchmark results by moving data directly to the triple-level-cell layer and bypassing the cache entirely. Writing the "old" way involved folding information over from the buffer to the main body of flash. If the small cache was full, transfers would slow down as its cells were purged. With direct-to-die writes, performance improves at the cost of long-term endurance.

That Phison controller in Corsair's Force LE is one of the most advanced available. It sports features like end-to-end data path protection, 256-bit AES hardware encryption, a power-fail protection circuit and Smart ECC technology. The controller also uses an eight-channel (to flash) design in the 480GB and 960GB models. Most other entry-level processors employ four-channel designs to save money. Corsair uses the hardware's capabilities to create what we anticipate to be a fast and dependable drive.

Corsair launched its Force LE series in three capacities: 240GB, 480GB and 960GB. Today, we are testing the largest model. The Force LE 960GB is the flagship, offering the highest performance. All three versions of the Force LE are rated for the same sequential read (560 MB/s) and write (530 MB/s) speeds. But random performance increases with each step up in size. The 240GB drive is purportedly capable of 83,000 random read IOPS and 40,000 random write IOPS. The 480GB model has the same 83,000 random read specification but increases write IOPS to 55,000. Meanwhile, the 960GB drive improves to 85,000 read IOPS and 60,000 write IOPS.

Endurance also increases with capacity. The 240GB drive is rated for 60 terabytes written (TBW), which doubles to 120 TBW on the 480GB model and again to 240 TBW on the 960GB version.

As mentioned, the Force LE takes advantage of Phison's direct-to-die sequential writes (read more about the controller's advanced features in our S10 preview). Corsair's sequential and random write specifications come from the burst speeds, though. Don't expect to see those numbers for more than a few seconds at a time.

We found the 240GB Force LE online for $59 and the 480GB version for $115, coming close to the MSRPs set by Corsair. The price of the 960GB Force LE, however, recently dropped from the MSRP of $250 to $210. Both Newegg and Amazon reflect this new, lower market price.

The Force LEs are covered by Corsair's standard three-year warranty, but are limited to endurance limits for each model.

Corsair hasn't changed this series' packaging since the Force 3 was released in 2011. Each model gets a new color scheme, but the basics and layout remain the same. Inside is mostly the same as well. The Force LE gets a few strategically-placed yellow touches to differentiate it from the other Force products.

The drive's chassis, on the other hand, continues to evolve. The days of dense metal enclosures are over for most companies, and Corsair is no exception. The LE uses a thin frame held together with tabs instead of screws. Other companies use the same 7mm-tall case to keep costs low.

Inside, we find the eight-channel Phison S10 quad-core controller with eight packages of Toshiba 15nm TLC flash and two of 512MB Kingston DRAM. On the surface, Corsair doesn't appear to stray from the reference design. But we won't know for sure about its firmware until we take a closer look at performance.