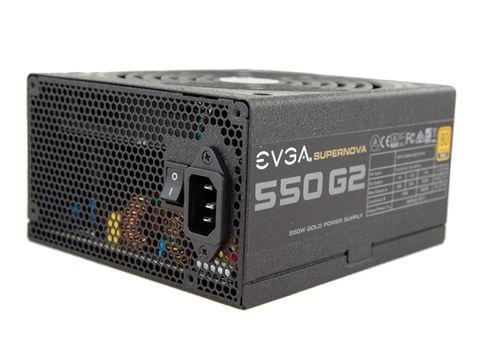 The 550 G2 is based on the famous Super Flower Leadex platform, which is currently among the best analog designs, offering high performance and up to Platinum efficiency. Super Flower set the bar really high with its newest implementations, and today, it's considered one of the top PSU manufacturers. Even companies with a huge presence and experience in this market, like Seasonic, take Super Flower very seriously. We should also note that Super Flower was the first company to release Platinum- and Titanium-efficiency PSUs.

The PCB of the 550 G2 is small and densely populated. The APFC heat sink is quite large, considering that it hosts only the bridge rectifier, the boost diode and a single FET. The rest of the heat sinks are small, but given this unit's small capacity and high efficiency, they will serve their purpose well. In the primary side, an LLC resonant converter is used along with a half-bridge topology; in the secondary side, we find a synchronous design, along with a pair of DC-DC converters for the generation of the minor rails. All of the components are of high quality; the capacitors are provided by Nippon Chemi-Con, one of the best capacitor manufacturers.

The small PCB that holds the AC receptacle and the main switch doesn't host any EMI filtering components. On the main PCB, we found four Y and two X caps, along with a pair of CM chokes and a metal-oxide varistor (MOV). The NTC thermistor that protects against large inrush currents along with the corresponding relay are installed right next to the bulk cap.

We couldn't identify the bridge rectifier because the markings are located on the side that's hidden from view, and we didn't want to desolder the large heat sink. The same heat sink holds the boost diode, a CREE C3D04060A and a single Infineon IPI50R140CP FET. Strangely enough, Super Flower used only a single FET in the APFC, and we believe that, with an additional FET, efficiency could be further improved. However, that would also increase the cost of production.

The bulk cap is provided by Chemi-Con (400V, 470uF, 2000h at 105 degrees Celsius, KMQ), and there is empty space right next to it for a second, smaller cap. It's a shame that Super Flower didn't install a second bulk cap, since the PSU's holdup time, according to our measurements, doesn't meet the ATX spec requirements. Lastly, the APFC controller is an NCP1653A, provided by ON Semiconductor. This IC is installed on a small vertical PCB and is covered by insulation tape in order to decrease EMI noise.

The main switchers, a couple of Infineon IPI50R199CP FETs, are installed on two small dedicated heat sinks and are arranged in a half-bridge topology. An LLC resonant converter boosts efficiency, as it provides almost lossless switching to the main FETs. The LLC resonant controller, which also drives the +12V FETs and handles the PSU's protections, is a proprietary IC with the model number AA9013. This IC is made by Super Flower, but there is no information available about its specifications and operation. The IC is installed on a vertical daughterboard located right next to the VRMs that generate the minor rails. On the same daughterboard, there is also an LM324ADG quad operation amplifier (op-amp), which assists the AA9013 in the protection features section.

Four Infineon IPP041N04N G FETs, which are installed on two small heat sinks, rectify the +12V rail. In the area around the +12V heat sinks, there are several electrolytic caps, along with a single polymer cap. As mentioned, all of the capacitors are provided by Chemi-Con.

Two DC-DC converters generate the minor rails. Each one is housed on a vertical PCB and uses a pair of Infineon IPD060N03L G FETs and an NCP1587A PWM controller. Metal shields surround the FETs of the VRMs, providing EMI protection. In front of the VRMs, there is a fan controller PCB, which houses an LM324ADG op-amp. Because the base of this PCB can easily break once you try to detach the fan header, the first thing we did after opening the PSU was apply lots of glue to secure it in place.

Next to the fan control PCB there is a Mospec S10C60C SBR that regulates the 5VSB rail. The PWM controller is a small IC with a "29604" marking, which wasn't helpful in the identification process.

On the front of the small modular PCB, which is firmly attached to the main PCB, we noticed several polymer and electrolytic caps, all provided by Chemi-Con.

The soldering quality is good but not the best we have seen from Super Flower. We noticed some blobby soldering, which won't affect performance but doesn't look good to picky reviewers.

The cooling fan is made by Globe Fan, and its model number is RL4Z-B1402512M (140 mm, 12 V, 0.3 A, 1200 RPM, 92.16 CFM, 24.9 dBA). It uses double ball bearings, so we expect it to last for quite a long time, especially since it isn't engaged at light and mid loads if you activate the Eco Mode. It is a low-speed fan, which, even at its full speed, won't output a loud noise. Super Flower has repeatedly proven that it can make silent PSUs, and we are pretty sure that this specific unit belongs in this category as well.

Prev Page Packaging, Contents, Exterior And Cabling Next Page Load Regulation, Hold-Up Time And Inrush Current
27 Comments Comment from the forums
Be In the Know