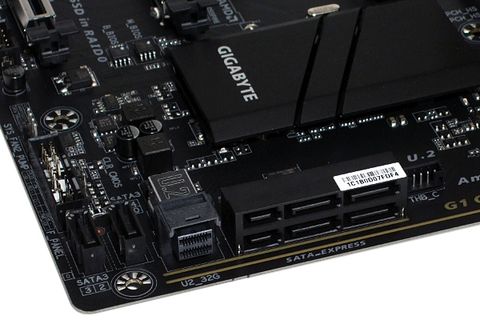 If you love the idea of Thunderbolt 3 and tire of the extreme-overclocking theme of traditional mid-range “Gaming” motherboards, Gigabyte’s Z170X-Ultra Gaming makes a value play.

Life is filled with compromises, and we are often left to seek the ones that get us closest to our goals. For instance, Gigabyte’s Z170X-Ultra Gaming gets Intel’s premium Thunderbolt 3 controller to a mid-market price point by leaving out a few features that hardware enthusiasts often expect. We’ve seen many mainstream motherboards perform and overclock well, and we’re sure that many buyers will find Thunderbolt 3 more valuable than a compilation of lesser parts.

Buyers who want SLI capability still get the set of four two-lane switches that allow the second PCIe x16-length slot to serve up eight lanes that would otherwise go to the top slot, so that the board automatically switches from x16-x0 to x8-x8 modes. As tradition dictates, the third x16 slot gets four lanes from the Z170 PCH. Nvidia precludes using this interface with a third card in SLI, but stubborn AMD users can still set three cards up in CrossFireX if they’re not afraid of its added latency and reduced bandwidth. That third slot is also configurable to PCIe x2 mode, and using it in x4 mode forces the motherboard to disable two of the SATA ports.

The I/O panel is where things get most interesting, since this is a Thunderbolt 3 board. That interface uses a USB 3.1 Type-C port, can be used as a 10Gb/s USB 3.1 port or a 40Gb/s Thunderbolt port, supports video and data simultaneously as Thunderbolt 3 should, and can also pass through external video sourced from a graphics card via the motherboard’s mini DisplayPort input connector. The CPU’s on-board graphics explains why there’s also a mini DisplayPort output, as well as HDMI. And the red USB port? It’s 10Gb/s and uses the same Thunderbolt 3 controller without offering all the controller’s additional protocols.

The Thunderbolt 3 controller made unnecessary any third-party USB 3.1 controllers which would have been present on similarly-priced, non-Thunderbolt boards.

And Then There Were Two

Remembering that the Z170 features a limited number of HSIO lanes that can serve either PCIe 3.0, USB 3.0, or SATA 6Gb/s duties, we shouldn’t be surprised that filling the M.2 interface (next to the CPU socket) forces the board to disable two more SATA ports. This is probably most concerning to those who want to put NVMe drives in both the M.2 and third PCIe x16 slot, since that configuration disables both SATA-Express groups. Then again, is anyone out there really using SATA-Express?

The Z170X-Ultra Gaming has the word gaming written all over it, and a quick look over the rest of the board shows several things missing compared to similarly-priced, non-Thunderbolt, gaming-themed motherboards. Onboard power and reset buttons, a Port 80 diagnostics code display, and a slightly more elaborate CPU voltage regulator are all things we would generally expect to see on a $160 gaming motherboard, if not for the cost of that Thunderbolt 3 controller. Most of these qualify as show features in a completed system, though extreme overclockers may have a realistic use for extra voltage regulators, and even casual overclockers will occasionally find the Port 80 display useful for diagnosing an impractical firmware setting.

Gigabyte avoided our frequent complaints about cable header placement by putting the least flexible of these, front-panel USB 3.0, above all of the expansion cards. The Z710X-Ultra Gaming also has two spaces between its two graphics card slots to improve airflow to the upper graphics card’s fans, or to allow extra-thick card coolers. The front-panel audio connector is still in the tough-to-reach bottom rear corner, but case companies are responding to our complaints by using longer cables. We even received a case recently that added on an extension cable.

The Z170’s HSIO limits give you the choice of many drives, or a few super-fast drives. Those who want three super-fast drives can watch as an M.2 drive consumes the resources of one SATA-Express set, a PCIe x4 drive consumes the other SATA-Express set, and the U.2 interface consumes the final two SATA ports. Just as SATA-Express was a cable interface for the previous M.2 standard, the U.2 32G header provides a cable interface for M.2’s current PCIe 3.0 x4 iteration, via a pair of dual-port connections. All three connection methods (the x4 and M.2 slots, and the U.2 header) are NVMe compliant.

The fan header in the photo above is one of two that let you select between voltage-based fan control and pulse-width modulation (PWM). Voltage regulation allows the motherboard to reduce the speed of devices that lack a PWM function, including most liquid cooling pumps and three-wire fans. The other three fan headers only have PWM speed control, though users who wish to control a pair of three-wire fans have the option of using a fan splitter on one of the two voltage control capable headers.

…But You Still Get The Cables

For builders too archaic to give up on SATA just yet, Gigabyte adds four SATA cables to the Z170X-Ultra Gaming’s bundle. The motherboard’s six SATA ports are shared with all three NVMe-capable connections, and you weren’t really going to give up entirely on that upgrade were you? Were you?

You’ll also get Gigabyte’s G-connector front panel lead bundler (for HDD/PWR LED and Switch), an SLI bridge, a nice chrome I/O shield, a round case badge, a driver and software DVD, a sheet of cable labels, a pair of hook and loop wire straps, a doorknob card, an installation guide, and a manual that does lay flat. Speaking of the archaic, does anyone remember how easy it was to read labels that were printed on heavy duty plastic I/O shield inserts? Chrome looks nice, but is vanity progress?