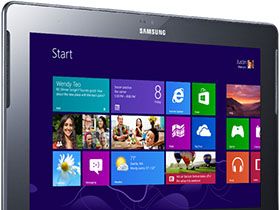 Now that we're a few months into the life of Windows RT and Windows 8, we're noticing a number of trends that describe the way we use tablets based on the ARM and x86 architectures.

Despite the apparent freedom offered by Microsoft, Windows RT just isn't the productivity enabler we were hoping it'd be. It's nice to have Office, but there's just so much else missing. And once you hit that first must-have piece of software you can't use on an ARM-based device, the honeymoon is over and you're back to more typical tablet-oriented usage patterns.

On the other hand, although Intel's dual-core Atom Z2760 is definitely underpowered as a desktop workstation replacement, the compatibility story of x86 is a major boon (and that's before we launch into any discussion of performance or power consumption). Devices like Lenovo's upcoming Helix will help address any concerns about the Atom with an Ivy Bridge-based Core i7, a 1920x1080 display, and up to 10 hours of battery life.

The Tab You Can't Have, For Now

We're way ahead of ourselves, though. The Helix is a couple of months out still, and today we have another Windows RT-based device to look at: Samsung's ATIV Tab. This tablet is significant for a couple of reasons. First, it's the first in our lab with Qualcomm's APQ8060A SoC, a dual-core Krait-based design with Adreno 225 graphics. Also, you won't be able to buy it in the U.S. for the time being (we're only finding it for sale in the U.K. and Australia).

At CES this year, Samsung announced that it wouldn't be bringing the Tab to our shores just yet, citing lingering confusion about what Windows RT can and cannot do. The investment it would have required to educate customers and keep costs down weighed heavily on that decision.

Can we say we blame Samsung? Hardly. Just imagine answering this one all day long: "So wait, it's Windows, but I can't install Chrome on it? I'm limited to that weak list of apps in the Windows Store? I wish I knew that before I bought this thing!"

Right out of the gate, then, Samsung's ATIV Tab faces the same uphill battle as Microsoft's Surface, Dell's XPS 10, Lenovo's IdeaPad Yoga 11, and any other number of tablets with SoCs from Qualcomm and Nvidia. Even in the face of generally favorable battery life numbers, the ecosystem they lean on is more dysfunctional than the x86 space Intel and AMD compete in.

And so, armed with the understanding that the ATIV Tab's fate here is currently in limbo, we spent time before and after CES with it, eager to compare Qualcomm's Snapdragon S4 to Nvidia's Tegra 3 using some new power analysis, a handful of fresh benchmarks, and our own senses. Can the Tab overcome Windows RT's limitations to replace the iOS- and Android-based tablets in our lives?

Fresh from Samsung's ATIV Smart PC 500T: An Atom-Based Windows 8 Tablet, the ATIV Tab feels very similar. In fact, we have the same feedback about the Tab's smooth plastic housing: we're not fans. The brushed aluminum look is aesthetically pleasing. But that glossy exterior feels slimy. It's bad enough that when you're handed a Tab that someone else was using, you want to wash your hands immediately after. The chassis also tends to "give" a bit when you press on it. We're glad to see Samsung design such an incredibly light tablet. In this case, as with the Smart PC 500T, build quality suffers, though.

Of course, we probably shouldn't be surprised that the Tab looks a lot like the Smart PC 500T. Samsung is going for a sense of continuity through its various tablet designs, which helps explain the glossy finish and the little plastic port covers over its I/O connectors (another "feature" we didn't care for on the Smart PC).

We're at least happy to see such a diminutive tablet include micro-HDMI, USB 2.0, and microSD along its top edge. It'd just be nice if we didn't have to leave those little plastic pieces dangling off of the Tab when the ports and slots are in use.

The same 13-pin connector we found on the ATIV Smart PC 500T is also easily seen at the bottom of the Tab. Unfortunately, you can't just drop the Tab into the 500T's docking station because it's a lot smaller. The notches used to lock the dock into place don't line up. We have to assume that there's a separate docking station on the way, but Samsung hasn't announced it yet. For the time being, we're using the ATIV Tab as a pure tablet.

Inside The ATIV Tab

As mentioned, Samsung leans on Qualcomm's APQ8060A to power the Tab. Manufactured at 28 nm, the APQ8060A hosts a pair of Krait processor cores running at 1.5 GHz and the Adreno 225 graphics engine. The SoC lacks cellular capabilities, but it does feature an integrated dual-band 802.11a/b/g/n radio for Wi-Fi connectivity.

Eager for more specific information about the battery that Samsung uses in the ATIV Tab, we took our sample apart and found the same 30.75 Wh power source used in the Smart PC 500T. That'll make our battery life testing a little more interesting, as we dig deep to figure out which SoC vendor offers the most efficient solution.