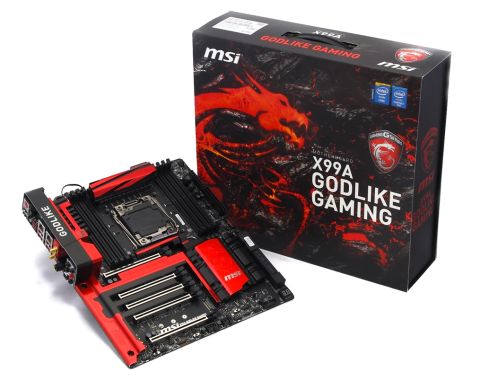 The Godlike uses MSI's usual Click BIOS interface with different settings and functions grouped under six tiles that surround a main window. Basic features are included like hardware monitoring, a visual board feature explorer, fan curve tuning, importing and exporting BIOS settings and MSI's OC Genie automatic overclocking. While almost all boards allow you to capture screenshots, the Godlike goes a step farther and lets you name the image before saving it. You also get a "Go2BIOS" feature (boots directly to into the UEFI when you hold the power button for four seconds) and a confirmation window that shows all changes made to the BIOS before you exit.

The overclocking settings in the Godlike are extensive. You can keep things (relatively) basic by setting the BIOS to Simple mode. As its name implies, it lets you adjust the simple things like CPU core multipliers, turbo settings, RAM frequency and voltage. Switching over to Advanced unleashes all the exhaustive settings such as CPU cache multiplier, per core multipliers, BCLK and RAM ratios. A strange omission was a CPU ratio setting (it automatically gets set based on the BCLK setting), but this isn't a big problem. The Help and Info tabs on the right side are quite useful in explaining the detailed settings with which even experienced overclockers may not be experienced, particularly the in-depth power controls.

Even as impressive as the i7-5960X is, its eight cores generate a lot of heat when overclocked. However, the Godlike has one of the best VRMs and power management controls I've seen so I was hopeful I could achieve a higher clock rate than its competitors. I started with the OC Genie to see what the board thought itself could do. It set the CPU to 37 x 100 MHz at 1.052V and the RAM to DDR4-2400 15-15-15-35 at 1.35V. Not bad, but I knew I could get better, especially on the RAM.

Swinging for the fences, I tried a 45 multiplier. It was good enough for most tasks, but buckled under heavy loads. A 44 x 100 MHz setting proved stable, but that wasn't enough for me. Knowing that lower multipliers tend to work better for CPUs and RAM, I upped the BCLK to the 125 MHz range with a 35 multiplier. A few tweaks later found 35 x 126 MHz was the highest I could go for a 4.41 GHz clock. It wasn't the 4.5 GHz I hoped for, but it was higher than the other X99 boards we've seen. Small victories, right? Other testing showed the BCLK limits to be 105 MHz and 131.5 MHz at the 1:1 and 4:3 ratios, respectively.

Overclocking the RAM was much more time consuming since higher frequencies become much more sensitive to timings and latencies. I ended up experimenting to find the fastest RAM frequency I could reach at various CAS values. This gets much more complicated when you include different RAM multipliers and ratios as well. However, the Godlike has nearly every RAM control and setting you could hope for.

The Godlike comes with MSI's usual bundle of Windows applications and utilities of Intel Extreme Tuning, MSI Command Center and Live Update. A few additional apps are included for the Godlike's additional features such as Super Charger for extra power to USB ports for mobile devices, the Mystic Light control panel, an MSI branded version of CPU-Z and Nahimic audio booster.

Prev Page In Search Of The Divine Next Page Benchmarks, Evaluation And Final Analysis
32 Comments Comment from the forums
Be In the Know